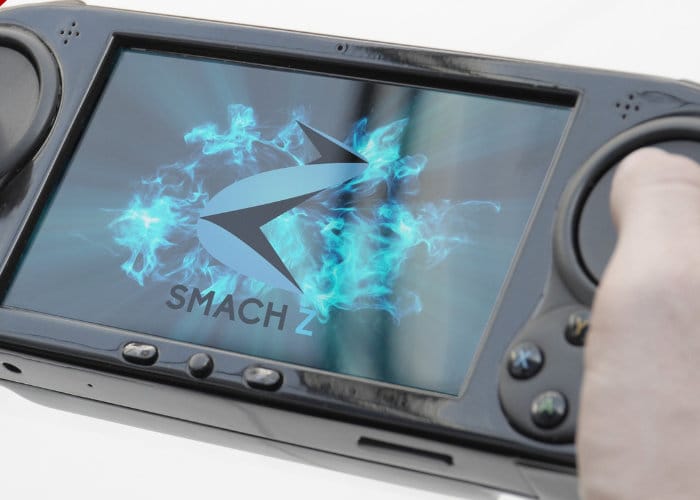 This week hardware manufacturer AMD has announced the imminent launch of their new embedded processors in the form of the EPYC 3000 and Ryzen V1000. Following on from this announcement the Smash development team currently in the process of designing the Smach Z handheld PC have announced that the handheld console will be powered by the new AMD Ryzen Embedded V1000 processor when it finally launches sometime during 2018. After originally being funded by a successful Kickstarter campaign that raised over €400,000 and an Indiegogo campaign that is currently raised more than $675,000 after starting back in 2016.

The Smach Z handheld PC games console has been in development for quite a few years, but the development team seem to be coming to the end of the development phase and will hopefully be shipping the console to backers before 2019. To recap the Smach Z is expected to ship with a 6 inch full HD display and will now be powered by the embedded AMD V1000 CPU supported by 4GB of RAM and including 64GB of storage. Smach CEO Daniel Fernandez explains that Inclusion of the new AMD processor allows the handheld PC console to be capable of playing “any AAA game”.

Smach will be showcasing their Smach Z at the Embedded World 2018 technology show taking place next week, which is available to preorder via the Indiegogo In Demand process. Check out the video below to learn more about what you can expect from the compact PC handheld games console.