To think Sifteo began as a graduate project at Stanford a few years back. Lo and behold, when these mini-PC game cubes/blocks finally debuted at CES, they sold out within hours. Details after the jump. 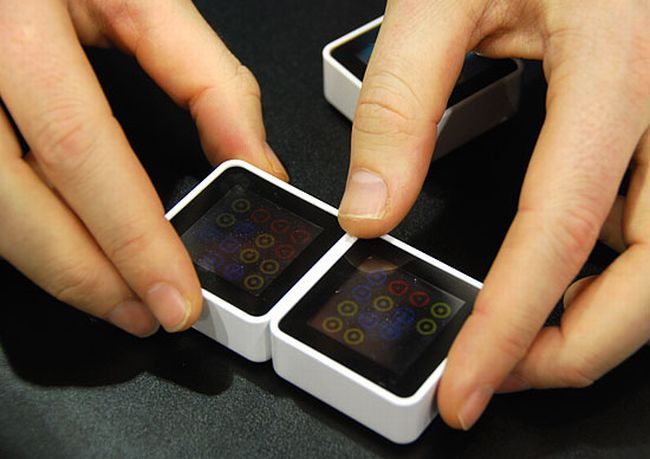 The success of Sifteo’s first batch of mini-PCs can be chalked up to its cuteness and novelty. Each Sifteo cube/block is, as mentioned, a miniaturized PC complete with processor, 128×128 display, WiFi, three-axis accelerometers, and four hour battery life. But the real magic is when you have a bunch of these and stick them together like in the pic above.

What happens? Why, gaming galore. Of course by games we don’t mean Crysis or Assasin’s Creed, but straightforward digital diversion that accommodates extra players. There’s a whole bunch of them found at the Sifteo’s official online app store which are downloadable and transmitable to the Sifteo cubes.

Word is game developers will soon hop aboard the Sifteo wagon, eager to exploit its user friendly qualities and create simple, fun games that would excite the senses of the multitude.

Alas, it wasn’t a multitude that gobbled up the first production run of Sifteo’s at CES—they sold out in a matter of hours and until feedback from these customers reaches Sifteo, the next batch is gonna be withheld to excite our eager anticipation. A set of three Sifteo cubes sells for $150 plus charging dock, with an additional $50 for an another cube. Neat-o!