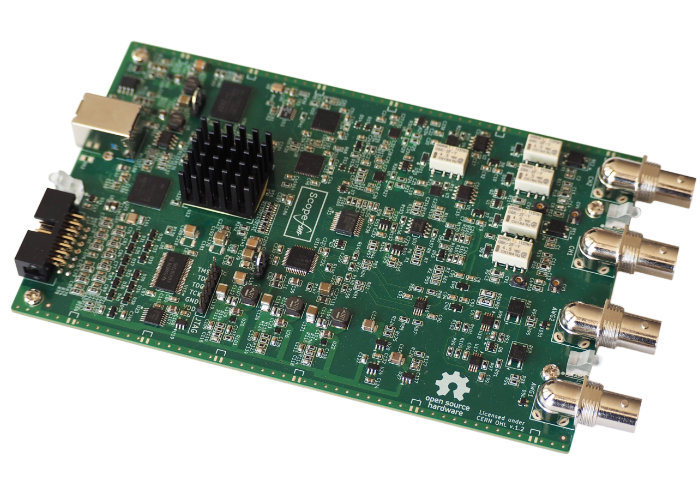 The hardware supports any accompanying software runs on Windows, Linux, and Mac and also provides a Server Mode that supports remote connections over an IP network. “A Xilinx Artix-7 FPGA and a Cypress EZ-USB FX3 controller allow the board to interface with a PC while maintaining fast data rates. Samples are buffered using 512 Megabytes of DDR3 SDRAM.

“Two analog channels are available as oscilloscope inputs. Both analog inputs are protected against over-voltages up to +/- 50 V. Input coupling selection is available (DC, AC, GND) and is controlled through software. Input signals can be adjusted for gain and offset to allow measurements of voltages from 100 mV to 20 V (full scale) which gives a minimum input resolution of 0.098 mV. Each analog channel is sampled at 250 MSPS with 10-bit analog-to-digital converter (ADC). Two ADC’s can be configured for sampling in interleaved mode which provides a single channel sampling speed of 500 MSPS.”