Samsung Unpacked event is few days away where we expect the Korean Company to unveil Samsung Galaxy Note III along with the much-rumored Galaxy Gear smartwatch. Samsung UK posts an interesting teaser on their Facebook page, offering users to win what will be unpacked on September 4 in Berlin. 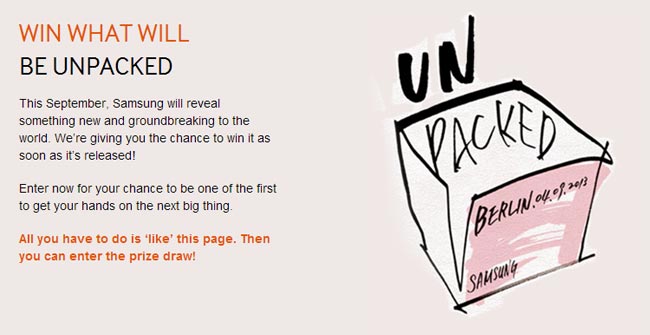 By now, you should have a pretty good idea about the things that are going to be “unpacked” at the event. Samsung execs officially confirmed that we will see the highly-anticipated Samsung Galaxy Note III as well as the Galaxy Gear smartwatch. So, this means that Samsung will be giving away both these device? We can’t say. You never know, Samsung Galaxy Note III may come out to be totally different than we anticipated. On the other hand, it could be Galaxy Gear as its a new and will offer users a different way to connect with their smartphone.

WIN WHAT WILL BE UNPACKED

This September, Samsung will reveal something new and groundbreaking to the world. We’re giving you the chance to win it as soon as it’s released!

Enter now for your chance to be one of the first to get your hands on the next big thing.

We have seen Samsung Galaxy Note III getting leaked in great details, we have a pretty good idea about the specifications it will bring at the table and how it would look like. In case of Galaxy Gear, we saw the rumored specifications but we haven’t seen the design of the device in any leaked image. People did make some concept watches but I’ll not fall for them.

We can’t say if it’s the smartphone or the Galaxy Gear watch that Samsung is teasing in this image but Samsung will be giving it away for all those living in UK. Everything will come to light this week and we will let you know once that happens.