Not too long ago, Samsung unveiled a whole new line up of its tablets including the 12.2 Galaxy NotePro as well as the Galaxy TabPro tablets. It includes three tablets carrying screen sizes of 12.2-inch, 10.1-inch and 8.4-inch.

According to a new rumor originating from Korean shores, Samsung might launch an 8.4-inch Galaxy Tab Round, which will come with a curved display that looks quite similar to its Galaxy Round handset. 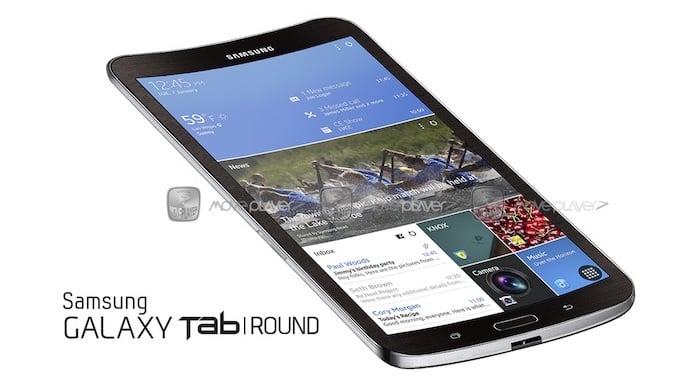 We’ve already seen curved TVs and smartphones, and it seems the tablets are next in line to get the curved display treatment. Also, the name Galaxy Tab Round is not anything official, but a made up name.

There’s no word about the specifications of the alleged tablet, but it should come with a little trimmed down specifications compared to the original Galaxy TabPro 8.4, which features an 8.4-inch display with Snapdragon 800 and Exynos 5 Octa depending on the WiFi/LTe versions, 2GB of RAM, 16/32GB storage and Android 4.4 pre-installed out of the box.

When the first Samsung curved smartphone, the Galaxy Round launch in Korea, it came with a very hefty price tag of around $1000. So, if the alleged Galaxy Tab Round is real, it would be pretty interesting to see the price tag it comes with, as well as the markets where it will hit retail.

Let’s just take this rumor with a grain of salt, as there’s no official word from the Korean OEM. We’ll update you if anything else comes up.