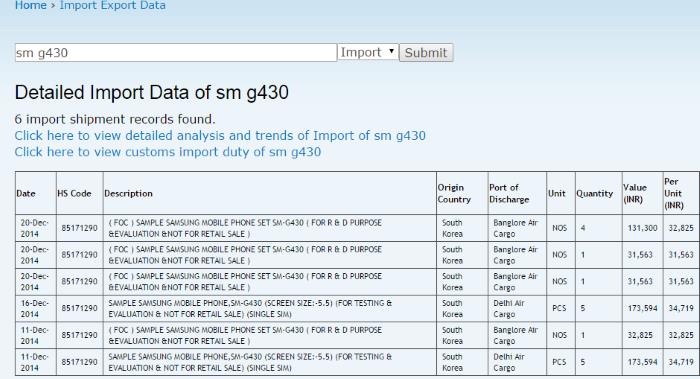 Although Samsung is planning to reduce the number of smartphones launched, we spotted a few new devices from the Korean OEM in the past few days, with several of them spotted on Zauba, an imports tracking website.

Today’s not different as another mysterious Samsung device with a SM-G430 model number was spotted on Zauba. The alleged device landed in India for research and development purposes, and baosts a 5.5 -inch display.

It’s not just Zauba, the handset was also spotted on Samsung’s user agent profile, which also reveals some of the specifications of the handset in question. It apparently features a 5.5-inch display with a resolution of 1920 by 1080 pixels, suggesting it’s a high-end device. The processor on the handset is clocked at 2.5GHz. As far as the processor is concerned, it seems we may be looking at a Qualcomm chip, possibly the Snapdragon 801 since it’s clocked at the same speed.

Last but not the least, the alleged smartphone will run Android 4.4.4 KitKat as its operating system, but we never know, it may launch with the latest Android 5.0 Lollipop.

There’s no word about the availability neither an official confirmation so a grain of salt is recommended.