Samsung has added two news chipsets to its Exynos portfolio known as the octa-core Exynos 5422 and a hexa-core Exynos 5260. If you’re wondering, there’s still no word about the 64-bit version of the SoC.

The octa-core Exynos 5422 has the same architecture as the Exynos 5420, and comes with eight cores: four big ARM Cortex A15 clocked up to 2.1 GHz and four small ARM Cortex A7 cores with a clock speed of up to 1.5GHz lighter jobs. The chipset is claimed to provide 34 percent improved performance compared to the earlier Exynos versions. 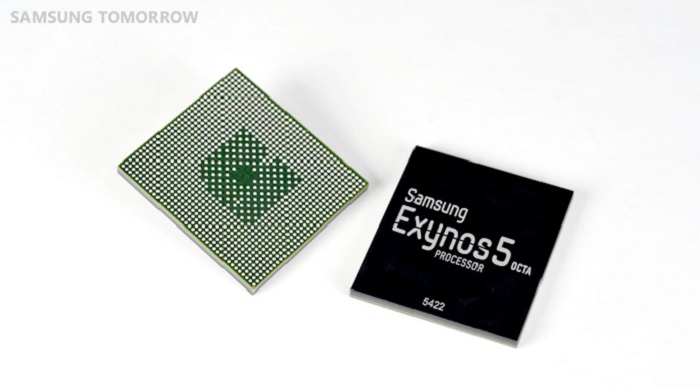 The chipset uses Samsung’s big.LITTLE HMP (Heterogeneous Multi Processing) technology to make the most out of the cores without draining too much battery, in short, it improves the performance without having a negative effect on the battery timing. It also brings support for higher resolution displays, such as 2560 x 1440 and more.

To support high-resolution displays requiring a higher rate of data calculation and bandwidth, such as WQHD (2560 x 1440) and WQXGA (2560 x 1600), Samsung has adopted new solutions with proprietary mobile image compression (MIC) and adaptive hibernation technology. With MIC, display data is compressed into half to minimize memory bandwidth requirement and uses only four MIPI lanes.

If you can’t recall, the Samsung Galaxy S5 could launch with the Exynos 5422. The octa-core 2.1GHz processor was also spotted on Samsung’s blog (now removed). This version could be the Prime version with support for WQHD resolution of 2560 x 1440 pixels. But, we never know.