Samsung unveiled its flagship device at the Mobile World Congress 2014 last month in Barcelona. The handset will hit the retail shelves on April 11th in over 150 countries, but it seems some folks already have the handset and have reviewed it for users to get a detailed look at the features it brings.

The latest reviews checks the performance of the device, as well as test most of the features introduced in the latest handset. For those who want to know, the review was done by a popular Russian blog. 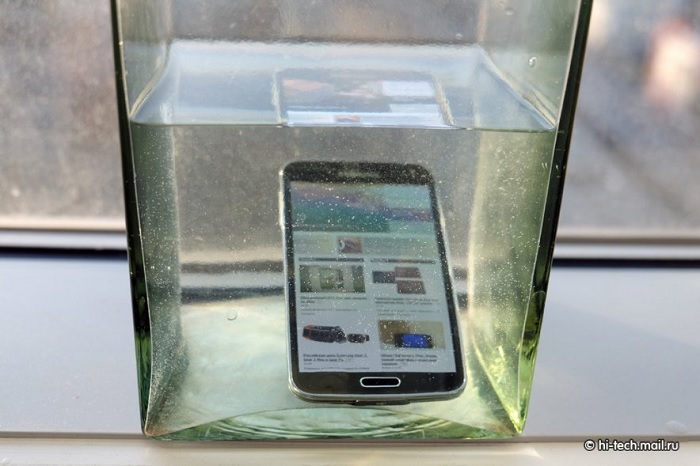 As far as the design is concerned, the reviewer did a comparison of the handset with last year’s Samsung Galaxy S4, and it does look a little bit bigger. The handset rocks a 5.1-inch display with 1080p resolution while its predecessor came with 5-inch display.

The review also tested the water-resistance feature as well, and placed the handset under running water, as well as placed it in a jar full of it. This does prove that it can bear the water for a certain amount of time. The handset is IP67 certified and can withstand under 1 meter of water for 30 minutes. While placed inside, do note the calls will not work, according to the reviewer.

The review is pretty detailed, and touches almost all aspects of the device. Head over to the source link below to read the complete review and let us know what you think. Are you going to get the handset once it hits retail?