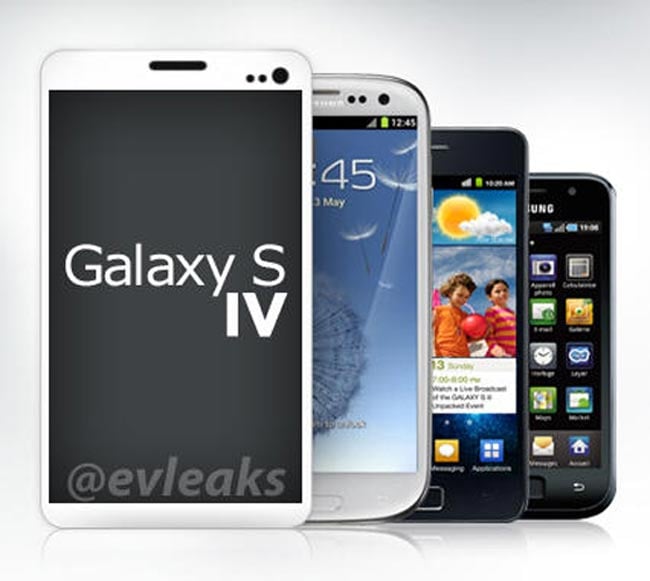 The US version of the Samsung Galaxy S4 is rumored to come with a quad core 1.9GHz Qualcomm Snapdragon 600 processor, and we have already seen some benchmarks of this device.

The International Samsung Galaxy S4 is rumored to feature Samsung’s 8 core Exynos 5 Octa processor with a clock speed of 1.8GHz, yesterday we saw some benchmarks of this device.

The rest of the specifications on the Samsung Galaxy S4 will be the same for both the US version and international version of the handset, the device will come with a 4.99 inch Super AMOLED display with a full HD resolution of 1920 x 1080 pixels.

Other specifications on the Samsung Galaxy S4 will include Android 4.2 Jelly Bean and a 13 megapixel camera with auto-focus and an LED flash, it will also feature a choice of 16GB, 32GB and 64GB of built in storage.

We are expecting a number of new features to be included with the Samsung Galaxy S4, one of these is a new camera feature called Samsung Orb, which will apparently be similar to Android’s photo sphere feature.

The Samsung Galaxy S4 will come with Samsung Wallet, a new feature which was announced recently, similar to Apple’s Passbook, and it will also feature NFC mobile payments, as Samsung recently announced that they had teamed up with Visa to offer mobile NFC payments on future Samsung devices.

Another new feature that will launch with the Samsung Galaxy S4 is eye tracking technology, in the form of Eye Scroll and Eye Pause, these trademarks were recently discovered and whilst we do not know exactly what they will do we can speculate on what they will be used for, for example Eye Pause could be used to pause a video you are watching on your Samsung Galaxy S4 when you move your eyes away from the display.

Another rumored feature on the Samsung Galaxy S4 is touchless gestures, which could be used to perform an action on your Samsung Galaxy S4 without having to touch the display, for example if you want to answer an incoming call on your Galaxy S4 you would just lift the handset to your ear to answer the call, rather than  pressing a button first.

Samsung are holding a Samsung Unpacked event in New York on the 14th of March where they will unveil their new Galaxy S4 smartphone, the event will also be live streamed in Times Square.

The Samsung Galaxy S4 is rumored to be released in April, and we are expecting a launch date of some time between the 15th and 22nd of April, this will be a worldwide roll out for Samsung this year, and the Samsung Galaxy S4 will launch in the US and Europe at the same time.

It looks like the photos above were renders from online retailer Expansys, and not official renders from Samsung.