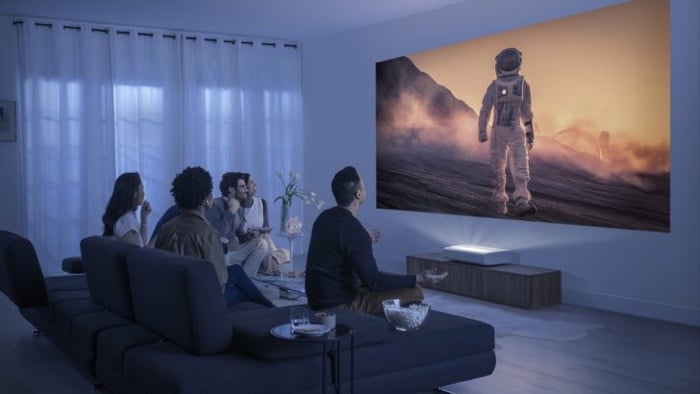 Samsung has launched a new 4K Ultra Short Throw Laser Projector in the UK and it will be available with pictures up to 130 inches and 120 inches depending on the model.

These new 4K Ultra Short Throw Laser Projectors will launch in the UK, US, Korea and Europe later this year.

The Premiere will be available up to 130- and 120-inch models – LSP9T and LSP7T respectively – that support a laser powered 4K picture resolution. The Premiere LSP9T is the world’s first HDR10+ certified projector with triple laser technology and delivers revolutionary contrast details as the user watches from bright to dark scenes with a peak brightness of up to 2,800 ANSI lumens. The Premiere also supports Filmmaker Mode for the first of its kind as a projector allowing users to enjoy watching movies as the directors intended. The smart projector comes equipped with Samsung’s Smart TV platform and experience full of streaming video apps from major content partners and mobile connectivity features such as Tap View and mobile mirroring.

The Premiere features an all-in-one compact, space-saving design that blends into a variety of living room settings and arrangements. As it is an ultra-short-throw projector, The Premiere can be placed just in front of the wall*. It is designed for an easy-to-install set up and sports fabric finishes around its edges to harmonise different environments. The Premiere has powerful built-in woofers and Acoustic Beam surround sound**, providing one of the best home cinema experiences on the market today, and reduces the need for additional bigger sound equipment in tighter spaces.

You can find out more details about the new 4K Ultra Short Throw Laser Projectors over at Samsung at the link below.