A long time ago (the mid-80s until the  early-90s to be specific), a multi-volume animated saga enjoyed  a huge following among otakus and geeks alike. This was Robotech, the anime equivalent of War and Peace in terms of scope and sheer epicness. Robotech follows a story arc that puts Halo to shame, chronicling Earth’s unending struggle for survival against waves of alien invaders. Oh yes, it also featured not one, or a handful, but dozens of iconic mecha that still linger in the wildest nostalgic fantasies of true believers to this very day. Among those cherished mecha is the transforming Cyclone bike. 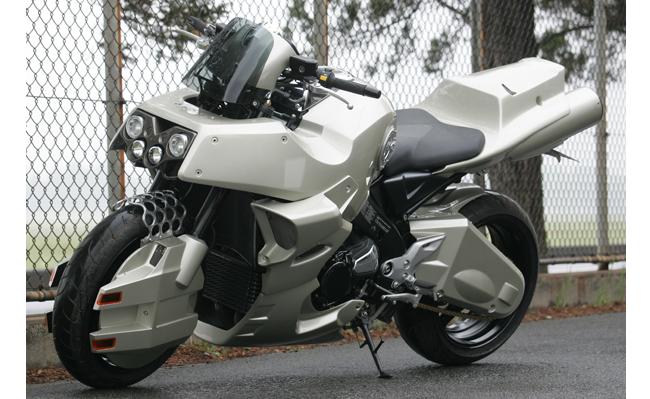 The motorcycle pictured above harkens back to that golden era, specifically the third generation if we’re not mistaken, when a ragtag group of freedom fighters battled the Invid aliens for supremacy over Terra.

Anyway, back story aside, a dedicated team of builders molded and fashioned a real motorcycle after the Cyclone, which originally transforms into battle armor for the rider. The real Cyclone these guys built doesn’t come with lasers and missiles, but it looks great. Thank the detailed engineering of Japanese anime vehicles for that–there was a credible multi-colored blueprint to follow real easy.

Opening the source link below would reveal a detailed gallery of the project. Unfortunately it’s in Japanese. But it’s quite easy to follow.