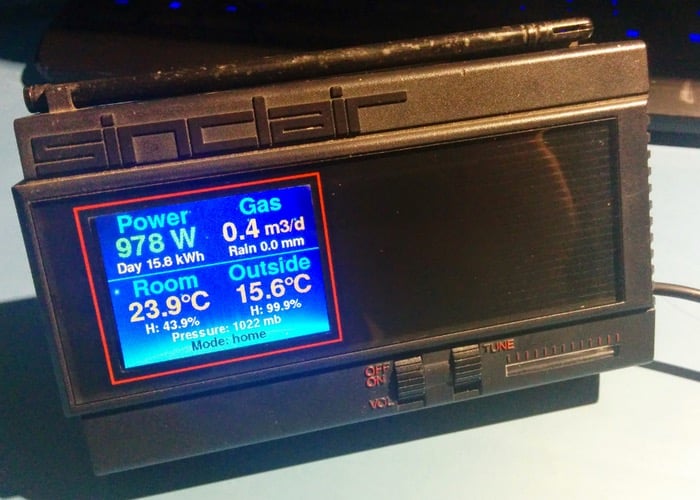 Why use of a brand-new case for your touchscreen TFT Raspberry Pi project, when you can use a retro Sinclair TV LCD case instead and breath life back into the old hardware.

Modder and developer Nathan Chantrell has this week publish details of a modification he has carried out using an original Sinclair TV LCD case and a Raspberry Pi mini PC, modding the case to use a new 2.2″ SPI LCD QVGA 240×320 display.

The Sinclair TV was originally first launched back in 1984 as a pocket TV and this new mod has brought life back to the ageing TV’s case in an awesome way. Nathan explains a little more about the mod.

“I got the idea for this after watching Dave’s teardown of the 1984 Sinclair flat screen pocket TV and thought it looked like a good candidate to make a cool retro style status display housing.

So soon after watching Dave’s teardown I headed off to eBay and picked one up, this one was non-functional to begin with (dead CRT) so I had no qualms about gutting it. With the guts and the fresnel lens removed you are left with a nice big space with a nice clear window for the screen.

It turned out that the Raspberry Pi Model A was almost exactly the right size but despite trying many different orientations I couldn’t quite get the case to fully close with it inside (if only I’d had this then) even after carefully bending the pins on the display over 90 degrees so they were parallel with the board. In the end I bit the bullet and decided to slim the Pi down by desoldering the composite video socket, audio output socket and the 26 GPIO pins. I then soldered the wires from the display directly to the necessary pads on the Pi. Now it fit with room to spare.”

For more information on the new mod using the Raspberry Pi and Sinclair TV jump over to Nathan’s website for full details and the required modifications to create your very own. For more details on Raspberry Pi displays and HATS jump over to our essential guide.