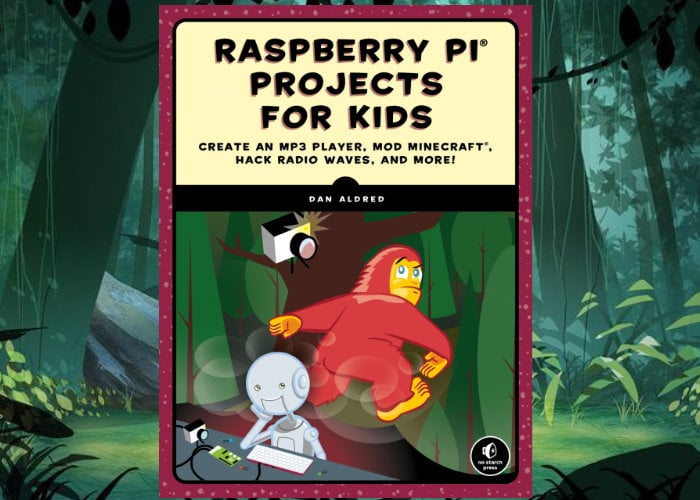 – Hot glue night light – using a silicon ice-cube mould and an LED to create a small light.
– Selfie snapper – the first Pi camera project.
– Pi Spy part 1 – using a normal webcam for surveillance.
– Manipulating Minecraft – how to use Python to “hack” into Minecraft. (This is similar to a lot of other starter projects involving Minecraft, but it’s good to see what I would term an “old reliable” make a comeback).
– Radio invasion – using the Pi as an FM transmitter.
– Automatic texting machine – using the Pi to send SMS messages using an external service.
– Pi Spy part 2 – tracking devices using Bluetooth and wifi..
– Magic music box – using the Pi as a music source for a speaker.
– Nature box – using a camera to detect motion.
– Smart plugs – using the Energenie smart plug system with the Pi.
– Mirror Mirror – using the Pi and a monitor behind a mirror to display social media updates.
– Computer games with the SenseHAT – uses the Pi and the SenseHAT as a game display and controller.

“Learn to build and code with these cool projects that hack common things and interact with the real world. Use the Raspberry Pi to turn lights on in your room through Minecraft; spy on bluetooth signal devices to see who is in the area; build an MP3 player you can send music to wirelessly; create a motion-triggered camera to automatically take pictures of wildlife; and other dastardly deeds. These projects are super easy to follow for even the total beginner, and you’ll end up with excellent products that are actually fun to use. Aldred explains the code in simple, step by steps ways that doesn’t overwhelm, but allows the reader to pick up concepts and learn the specifics through building.”

“The author Dan Aldred is a Computer Science teacher, and a freelance resource writer and hacker. He has championed the use of the Raspberry Pi as a tool for learning and creativity, and is a Raspberry Pi Certified educator. Dan currently resides in the UK.”