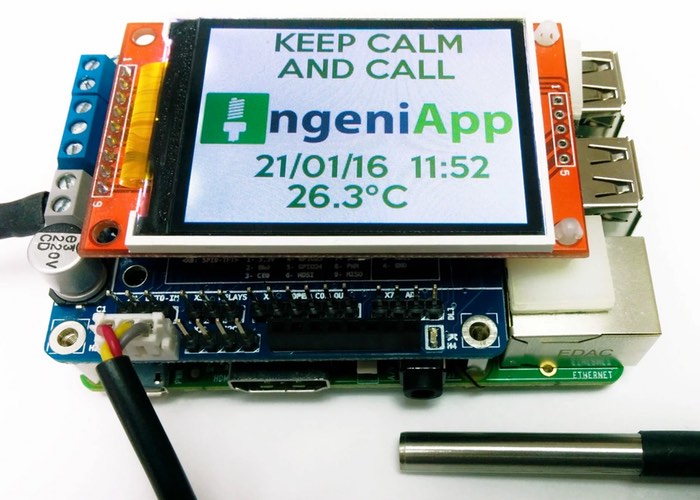 Raspberry Pi enthusiasts but are looking for an easier way to add multiple functions to their Raspberry PI models A+, B+ B2 and Zero mini PCs are interested in a new multifunctional Hat Board which is being created by IngeniApp based in Madrid, Spain.

The multifunctional Pi Hat has been designed to make it really easy to create a variety of different projects from the single board including the ability to control motors, collective weather sensors, analog sensors and even attach a small colour LCD screen.

Features of the Raspberry Pi Multifunction Hat Board IRP-102 include :

– RTC: Real time clock, Microchip MCP7490N based. This device allows Raspberry Pi to keep the right time without having internet connection. The clock is backed up by a CR1220 coin cell.

– RS232/485: The board includes RS232 and RS485 interfaces conected to the UART available in the Raspberry Pi. Both interfaces work in parallel within the same port, allows connecting multiple industrial and legacy devices which still are using serial ports. The access to these ports are bi means of screwed block terminals for easy handling.

– Open collector outputs: IRP-102 incorporates a ULN2803 I.C. which provides high current outputs, allowing the use of relays, motors, or any other device with high power needs. At X5 connector you have two outputs and at X6 you have five more. The remaining output is for activating the onboard led.

– ADC: A two channel ADC is available for taking analog measures. The ADC is connected to the Raspberry Pi I2C bus. This is a MCP3426 by Microchip.

– LCD interface: The board includes a connector for attaching a 2,2” LCD with 320×240 pixel resolution. This display will be managed by SPI-0 bus.

– RFID-NFC interface: Connecting through SPI-1, you can use a RFID reader based on MFRC522 or similar. This means it be able to add read an write card functionality to your project. Although this connector is specifically designed for it, is posible to use it for any other SPI device.

– Opto-isolated inputs: Through a dual optocoupler, the board supports two electrical isolated inputs for detects level changes in external devices.

– DC 5V input: This input is for powering the Hat-Board and Raspberry Pi at the same time by a screwed block terminal. The board includes the same protection elements than the Raspberry Pi B+ or B2.(Fuse, reverse polarity, etc), but the provided voltage must be regulated at 5V. The board also includes a 3,3V LDO to provide this voltage from it instead of taking from Raspberry Pi.

For more information on the new Raspberry Pi multifunctional Hat jump over to the Kickstarter website for details via the link below. If you found this article interesting you might also be interested in this list of awesome Raspberry Pi Zero projects we have put together.