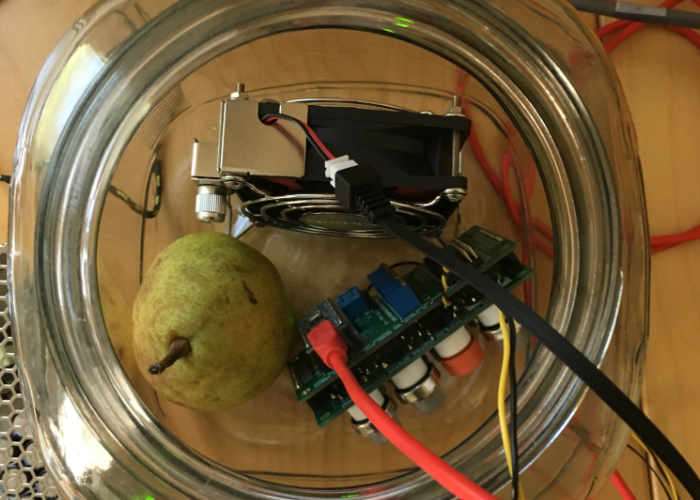 Raspberry Pi enthusiasts might be interested in an interesting project currently being created by Craig Durkin, which uses the awesome mini PC to create an electronic nose which can be used to detect fruit ripening.

The electronic nose is used to monitor fruit trees and report when their fruit is ripe for picking. The Raspberry Pi system uses affordable Taguchi gas sensors allowing oxygen from the air to absorb on to the surface of a tin dioxide semiconductor and causes its resistance to increase.

Our organization (Concrete Jungle) picks fruit from urban fruit trees around the Atlanta area. One problem that we face is that as we grow, it becomes harder and harder for us to keep track of our trees — they all produce on slightly different schedules (or not at all) and we need to know what each is doing before we can plan a fruit-picking event.

We’ve teamed up with Carl DiSalvo’s Public Design Workshop at Georgia Tech to try to create an electronic nose that can smell fruit ripening in a tree. This way the tree could let us know when it’s ready to be picked. We’re trying to work with cheap Taguchi gas sensors as you might find on Sparkfun. Although these sensors are sold as a propane/alcohol/… sensor, they are not particularly specific to those gases. We’re hoping that by using an array of these sensors we’ll be able to tease out a meaningful signal.

Taguchi sensors generally work the same way: oxygen from the air adsorbs on to the surface of a tin dioxide semiconductor and causes its resistance to increase. When the heated sensor comes in contact with a combustible gas, the gas and the oxygen react, removing the oxygen from the sensor surface and decreasing the sensor’s resistance. It might say it’s an alcohol sensor, but by its nature it can’t help but sense other combustible gases (which should cover most hydrocarbons).

For more details on the interesting project jump over to the Hack A Day website by following the link below.  If you enjoy building Pi projects you might be interested in our comprehensive list of Raspberry Pi displays, HATS and small screens.