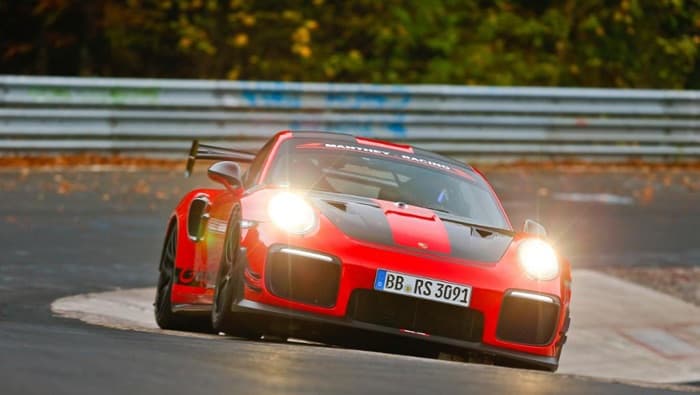 Porsche previously held the record for the Nürburgring with their 911 GT2 RS, the record was then taken from Porsche by the Lamborghini Aventador SVJ.

Porsche has now reclaimed the Nürburgring lap record with the Porsche 911 GT2 RS MR which set a new record time of 6:40:30, the previous record of the Lamborghini Aventador SVJ was 6:44:97.

The 911 GT2 RS was equipped with a new Manthey Racing performance kit, which helped the car achieve the new record.

“We kept our eye on the weather all day and thought hard about whether such a drive was possible. We would not have taken any risks if it was raining or if the track was slightly damp,” says Dr. Frank-Steffen Walliser, Head of Motorsport and GT Cars. The Porsche 911 GT2 RS was equipped with the new performance kit from Manthey-Racing, supplemented by an overall vehicle setup tailored to the circuit characteristics of the Nürburgring-Norschleife. “In this test drive, we simply wanted to assess the potential of the vehicle once more. The result is quite impressive. It really is a fabulous time. This shows again very clearly the exciting possibilities of this sports car.”

You can find out more information about the Porsche 911 GT2 RS MR over at Porsche at the link below.