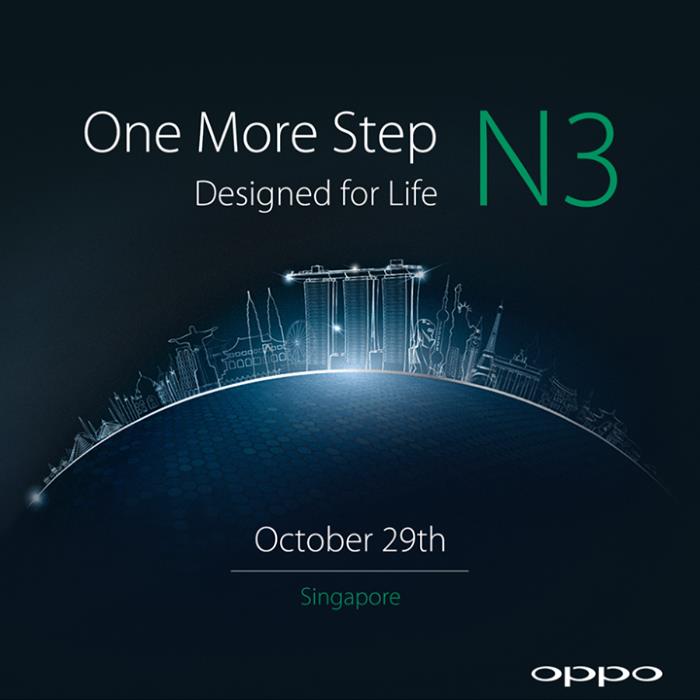 Oppo N3 has been teased, and leaked, on a number of occasions in the past few weeks. We’ve seen a number of press renders of the alleged device, which is expected to come with the company’s traditional rotatable camera.

It turns out we’ll get to see the handset in all its glory in the coming weeks. Oppo has scheduled a “One More Step. N3. Designed for Life” event on October 29th in Singapore.

It clearly mentions the highly anticipated Oppo N3 on the event poster image. Furthermore, the Chinese OEM posted the event confirmation on their Facebook page captioned “As Oppo prepares for the next great step, Singapore opens its arms for the N3 launch!”

Previous rumors suggest that N1’s successor will feature a 5.9-inch display sporting a resolution of 1920 by 1080 pixels. The processing power comes from a quad-core Snapdragon 805 chipset. There’s 3GB of RAM, and a 13MP camera which can rotate to almost 206 degrees to capture photos and videos.

Rumors further mention that Oppo may launch two versions of the handset with one of them featuring a lithium alloy casing, while the other one will be equipped with stainless steel.

There’s no word about the exact availability date or pricing, but we’ll find it out in the next few weeks. Stay tuned, we’ll update you as soon as the handset is officially announced.