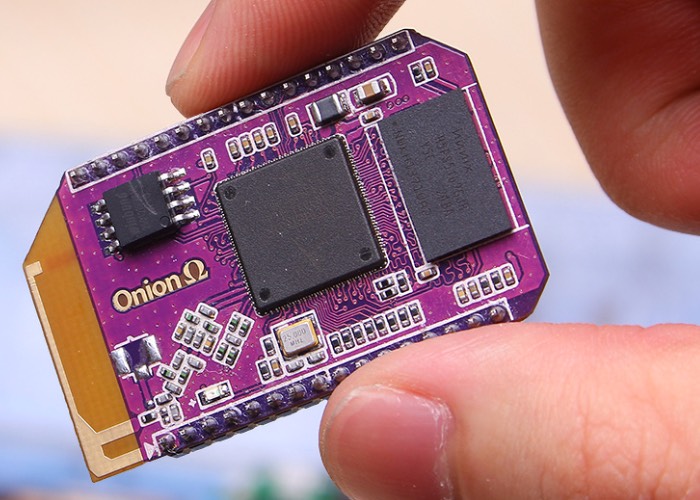 Following on from our article February introducing the new Onion Omega development board and invention platform for building Internet of Things projects, those of you that have been patiently waiting for its Kickstarter launch will be pleased to know that it is now available.

The open source Onion Omega is a hardware development platform that has been designed specifically for software developers and takes the form of a small yet powerful Linux + WiFi development board.

The Onion Omega also features cloud integration and app store, making projects is as easy as say installing applications on your smartphone. Its creators Onion explain a little more :

“It comes with built-in WiFi, Arduino-compatible and it runs full Linux. It lets you prototype hardware devices using familiar tools such as Git, pip, npm, and using high level programming languages such as Python, Javascript, PHP. The Onion Omega is fully integrated with the Onion Cloud, making it a breeze to connect physical devices to the Web to create Internet of Things applications.

The Onion Omega’s powerful processor is capable of running the full Linux operating system. This means you can install OpenCV with a single command to add image recognition capabilities to your drone. You can use git to check out the latest changes your colleagues made to the coffee brewer.

You can use pip or npm to incorporate libraries that allow your thermostat to talk to Twitter. The Onion Omega provides you with familiar tools that reduces learning curve and enhances your productivity in hardware development.”

The Onion Omega project is now over on the Kickstarter crowd funding website looking to raise $15,000 in pledges to make the jump from concept to production.

So if you think Onion Omega is something your projects could benefit from, visit the Kickstarter website now to make a pledge from just $19 and help the Onion Omega development board become a reality.