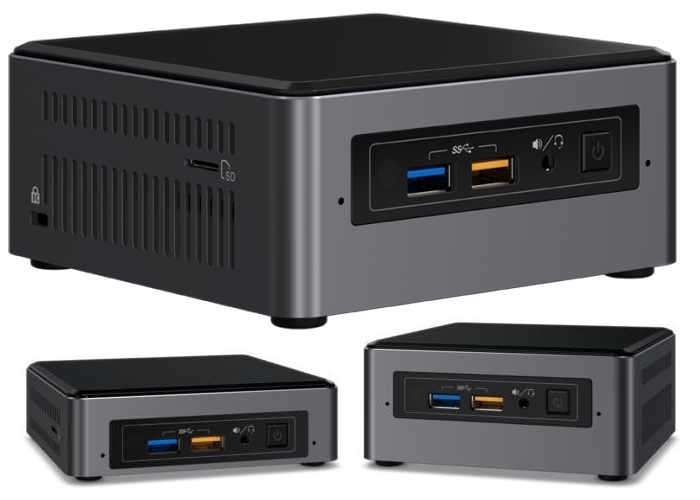 Intel has revealed more specifications about its new range of Intel NUC (Next Unit of Computing) mini PC systems which are now equipped with HDMI 2.0, Thunderbolt 3 and Intel Kaby Lake processors with new integrated GPUs. 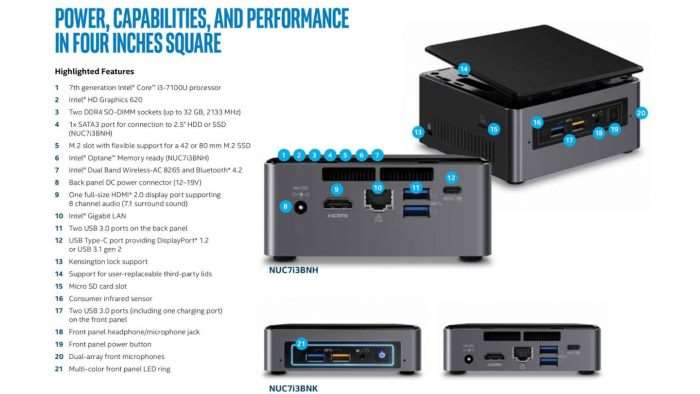 The Core i7 has been created to replace the older dual-core Broadwell i7 NUC and not the recent quad-core “Skull Canyon” model. The Ars Technica Website explains more about the new systems :

The Core i3 and i5 versions come in both “short” and “tall” cases, the latter of which offers space for a 2.5-inch laptop-sized SATA hard drive or SSD. The i7 version only comes in a “tall” version. Like past NUCs, all five models offer two laptop-sized DDR4 RAM slots and an M.2 slot for SATA and PCI Express SSDs (up to four lanes of PCIe 3.0 bandwidth is available). Bluetooth and 802.11ac Wi-Fi is built-in.

All of the new NUCs benefit from a revamped design that uses a darker aluminum finish and moves the power button from the top of the box to the front—the button location will be more convenient most of the time, since you’ll be able to put the NUC onto smaller shelves or stack things on top of it without losing access to the on/off switch. Unfortunately, this also means that customizable lids for older NUCS are incompatible with the newer models. The power button also uses a new user-customizable, color-changing LED. You can decide which color to make it, and you can decide its behavior (by default Intel says it functions as a disk activity indicator, though you can presumably make it a regular power indicator if you don’t want it blinking all the time).

Unfortunately no confirmed pricing or worldwide availability has been released as yet, but the system are expected to be priced at around $500 for the i7 model, around $400 for the i5 model, and at or a little under $300 for the Core i3 model which will be available later this month while the higher end mini PC systems will be launched sometime by the end of Q1 2017. As soon as information comes to light we will keep you updated as always.