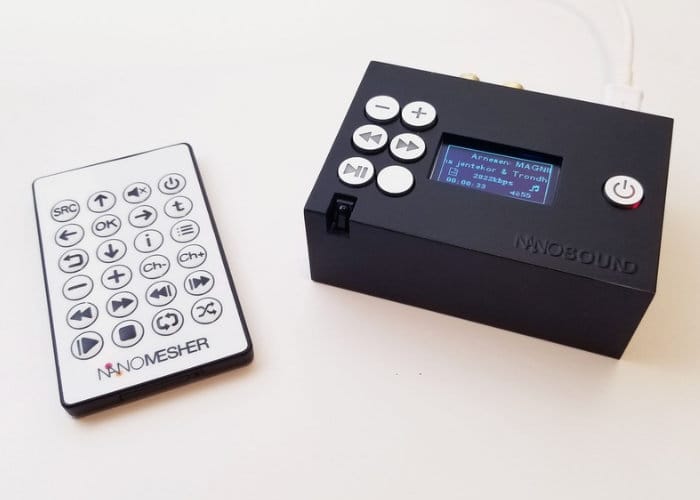 The development team over at Nanomesher has once again returned to Kickstarter to launch their latest campaign, with the aim of raising funds to help take their NanoSound Raspberry Pi powered media player and portable digital audio storage system into production. Building on the success of the previously launched NanoSound DAC, the NanoSound comes complete with a remote control and is available to back with pledges starting from roughly £26, and delivery expected to take place during April 2018. Watch the demonstration video below to learn more about the NanoSound Digital high quality payer that offers S/PDIF audio output with optical and coaxial output options if desired.

The NanoSound digital takes the form of an all-in-one audio add-on for an powered by the awesome Raspberry Pi mini PC, offering high-quality S/PDIF audio output, Media Control Buttons, Display and Remote control. As well as offering a power switch for your Raspberry Pi making it easier to turn off and reboot when required. NanoSound Digital is the S/PDIF digital output version of NanoSound DAC and is compatible with HiFiBerry Digi audio driver.

The development team has also announced the release of its new NanoSound Plug-in for Volumio v 2.0 which offers huge  software improvements to current NanoSound Plug-in for DAC and Digital systems which are sure to keep current owners more than happy. For more information, a list of all available pledges and full specifications, jump over to the official Kickstarter crowdfunding campaign page by following the link below.