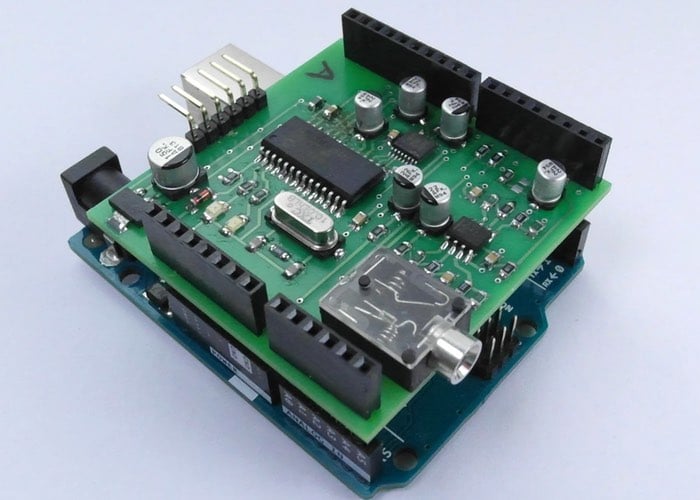 Frédéric Meslin has created a new multitimbral FM Synthesiser Shield for Arduino that has been inspired by retro-consoles and has been designed for the creation of chiptune music, custom instruments and art setups.

Watch the promotional video embedded below to learn more about the synthesiser shield for Arduino which has taken to the Kickstarter crowdfunding website to raise €8,000 over the next 27 days.

OP·A is a multitimbral FM synthesiser shield that’s bursting with character. Inspired by the classic sound-chips found in 90’s video game consoles, keyboards and sound cards, OP·A gives your next project retro flavored sounds and music, all through a simple serial interface.

We wanted OP·A to be: Simple to integrate into any Arduino based project, Able to play great sounds right out of the box, Easy to program and Affordable. Acoustic drums are not produced by the OP·A shield. All instruments are simultaneously played. No effect, no reverb and no equalizers have been applied to the OP·A sound. The OP·A shield is controlled using the Arduino serial port and few additional lines.

For more information on the new multitimbral FM Synthesiser Shield for Arduino jump over to the Kickstarter website for details and to make a pledge for just €35 to be able to get your hands on one of the very first of the production line.  If you liked this you might also be interested in building an Arduino wind speed meter.