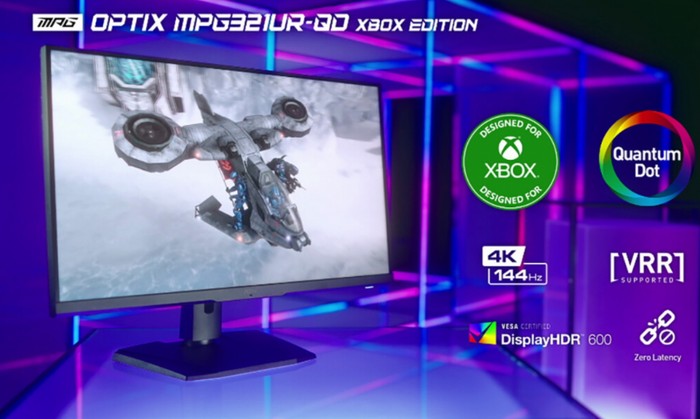 MSI have this month introduced a new Xbox monitor in the form of the Optix MPG321UR-QD 4K gaming display providing a special edition specifically designed for the Xbox console and offering a UHD (3840×2160) resolution and supports up to 144hz with HDMI 2.1, serving as the perfect companion for next-gen consoles says MSI.

The Xbox monitor is equipped with Quantum Dot Technology, Adobe RGB 99% and DCI-P3 97%, it has great color range and color gamut and MSI have collaborated with the Xbox team to offer Xbox gamers an immersive gaming experience.

“The Xbox Edition monitor comes with various features especially designed for console gamers to provide an amazing experience on the Xbox series X/S. The MPG series also features MSI exclusive Gaming intelligence which includes Sound tune, Smart Brightness, and also KVM features which also includes controller support. Quantum dots are nanocrystals that absorb light. When hit by light, they give off a precise color repoduction resulting in realistic imagery. Many reviews and acclaimed media have also praised the color performance of the MPG321UR-QD. Some media have even selected this monitor as the best 4K gaming monitor in 2021.”

“To improve user experience, MSI has designed a series of smart software based on years of research and development of Esports and an understanding of the needs of gamers. These features include Smart Brightness, Smart Crosshair,Optix Scope Night Vision AI, and Sound Tune.”

“The MSI Optix MPG321UR-QD 4K gaming display is a powerful Xbox monitor and MSI has collaborated with the Designed for Xbox team to give Xbox lovers the 4K gaming monitor they deserve. This monitor performs exceptionally for both PC and Xbox games. Gamers can play on Xbox with UHD resolution at 120 Hz by HDMI 2.1 and enjoy vivid colors with Quantum technology.”