The bad news is it’s only available in Japan at the moment. Don’t fret though, as the Android app will soon have its iOS counterpart. In the meantime, allow us to guide you through Mosquito Buster. Contrary to what you might think, it doesn’t cause your smartphone to emit mosquito-killing smoke. That would be positively dangerous. 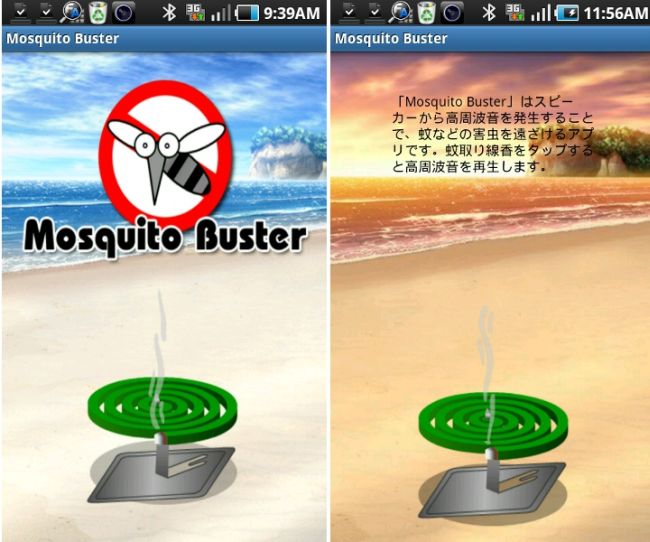 In a lot of places around the world, mosquitoes are a real pain. That’s in every sense you can think of. Multiple mosquito bites aren’t funny either and are among the most prolific killers in the world. (Uh, malaria?)

To combat this scourge, at least in Japan, a gaming company has developed an app that emits a high frequency notice inaudible for humans, but torturous for mosquitoes. We can’t cite any lab testing or scientific analysis of this technology, so we’ll just have to take the maker’s word for it.

Ideally, the Mosquito Buster app would work in any situation where mosquitoes are a serious problem. Whether but in public or somewhere near a hidden stagnant pool of water, where they thrive like aliens.

The real catch here is the Mosquito Buster can’t be working all the time, since you have to charge your phone. So maybe it’s a convenient tool at best. If you want a good night’s sleep without mosquito bites, however, try buying a net. That’s the best, time tested way to stave off the fearsome blood sucking creatures.