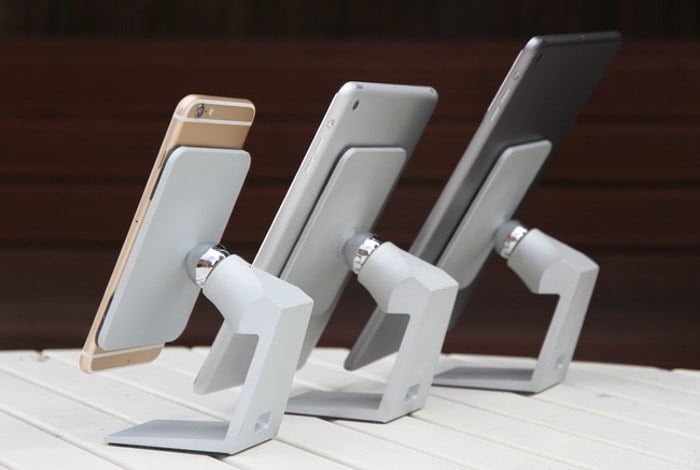 Anyone in the market for an aluminium tablet stand that also allows the angle of your tablet screen to be adjusted to suit almost any viewing orientation.

Might be interested in the newly re-designed MiStand+ created by Mi which has been launched over on the Kickstarter crowdfunding website this month and builds on their first tablet stand.

The MiStand+ has already blasted past its required pledge goal, making sure that the tablet stand goes into manufacture once the Kickstarter campaign has come to an end in just under 28 days time. The developers of the MiStand+ aluminium tablet stand explain more about its design and functionality.

We didn’t want to change things just for the sake of it. Every design decision has a functional purpose so that we could make a better product. We read through every comment on Kickstarter and every e-mail we have received since launching the MiStand, and got to work on improving it.

The base of MiStand+ has been carefully tapered to improve ergonomics and to reduce the weight of the new design. A cable slot has been milled in to the back face of MiStand+ to allow any standard USB cable to pass through. This is great for backers who like to place their MiStand+ on a desk or bedside cabinet and charge their tablet.

As promised passing 350 backers means the MiStand mini is now available. The MiStand mini is perfect resting spot for your smartphone. It’s a simple all aluminium unibody design and we have upgraded it by adding the all new Polyurethane pads found on the MiStand+ it means that MiStand mini now works with any phone with or without a case!

For more information on the new MiStand+ jump over to the Kickstarter website for details via the link below.