There are superbikes and there are e-superbikes. The Mission R belongs to the latter. Bike fans are strongly recommended to take a gander of the serious specs underneath the Mission R’s flashy exterior. 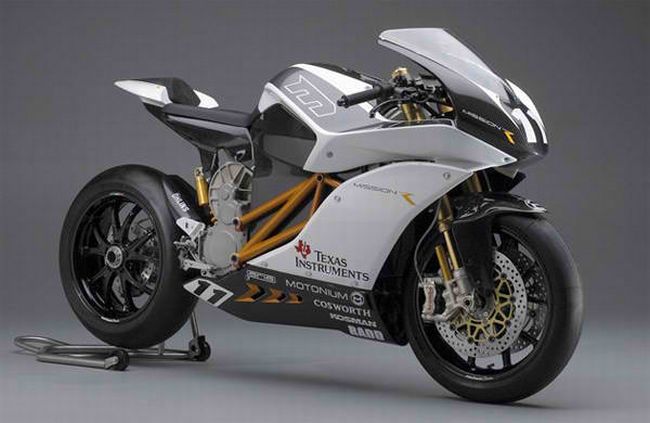 The Long Beach International Motorcycle Show was the occasion for the unveiling of the Mission R, a sleek new racing superbike, a 141hp monstrosity armed with a 3-pahse AC induction motor. The chassis is the work of Motonium’s Tim Prentice and the Mission R is expected to burn up a track for next year’s TTXGP racing series.

Here’s what Mission Motors founder Edward West had to say:

“We are excited to announce the Mission R, our compact and powerful factory electric racebike. This bike represents the culmination of all the company’s learning in both electric powertrains and motorcycle engineering.”

On Mission Motors’ grand plans for its racing superbike next year:

“Racing is in our DNA. Mission Motors participated in the historic first Isle of Man TTXGP in 2009. Later that year, we went to the Bonneville Salt Flats and set an AMA Speed Record for electric motorcycles in 2009. With the help of our sponsors, including Texas Instruments and Pectel/Cosworth, we are excited to be returning to the track in 2011 with the phenomenal Mission R. The crucible of the racing circuit is one of the key ways we advance our technology. Pushing the envelope for what is possible with electric drive shapes not only the future of motorsports, but the future of transportation.”

The clincher is Mission Motors hasn’t leaked how much one of their super-babies costs.