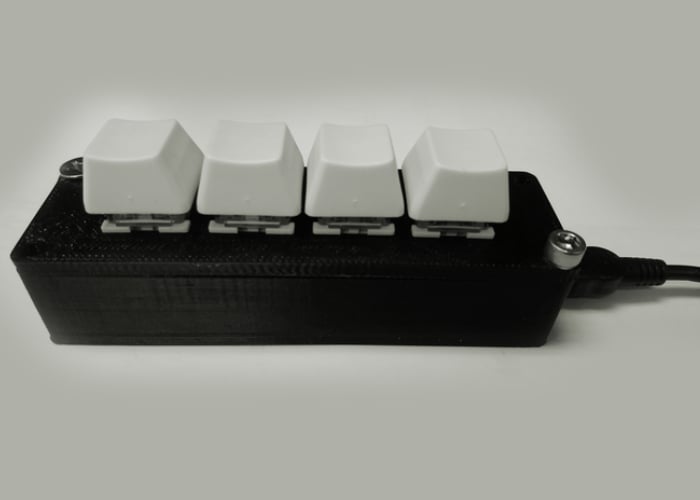 Mikael Lavoie has created a new mini programmable keyboard which consists of just four keys, which can be reprogrammed using a simple Windows application to meet your needs. Watch the demonstration video below to learn more about the shortcut keyboard which has this week launched via Kickstarter to raise the required funds needed to make the jump into production stop

Early bird pledges are available from just C$10 for the DIY tutorial or if you prefer a programmable keyboard kit $40 will provide you with everything you need including the Windows application to configure it. If the crowdfunding campaign is successful worldwide shipping is expected to take place during May 2019.

“Right now, the keyboard is FULLY functional. I plan on adding a section to save some pre-configured Keys to make it as simple as possible, a multiple key input shortcut (Ctrl + x) and maybe a macro recorder if I am able to. As for the physical Keyboard, at first I wanted to make it avaiable on Amazon but the problem is that the parts of the keyboard take 4 to 6 weeks to ship. (I could purchase everything elsewhere but then, I would need to sell the keyboard at a loss) So using Kickstarter will allow me to buy the parts to make the amount of keyboards required 4-8 weeks after receiving the funding money. If I do not reach my goal, I will not pursue with the idea since I don’t want to be stuck with 10 of those without anyone willing to pay for this kind of keyboard.”

For more information jump over to the Kickstarter campaign page by following the link below.