It’s been a while since Microsoft released their Office suite of apps for iPad, and in less then two days, Word, Excel and Powerpoint managed to top the charts in various regions across the globe.

At first, it may seem that Office for iPAd may be the productivity suite every iPad users must be waiting for, but we’re not sure. There are several handy alternatives available in the App Store, but obviously, an official Word app from the Redmond-giant itself was supposed to get this much popularity. 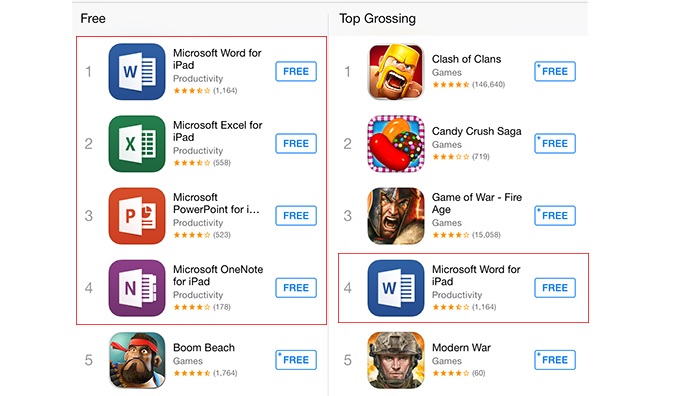 All the apps — Word, Excel and Powerpoint — for iPad follows a freemium business model, and can be download free from the App store, but with limited functionality, at least for the iPad owners. The free model lets users view their documents on the app, but to edit them, you need to have an Office 365 subscription which costs $9.95 per month.

Microsoft also announced a personal package which will be available in the coming weeks, and costs a little lower, that is, $6.99 per month. Users also have the option of purchasing an Office 365 subscription from within the app, but in that case, it will have to give a little bit of share to Apple.