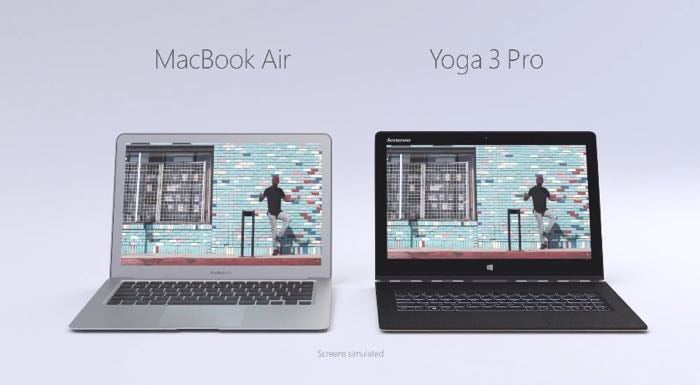 The MacBook Air has been a popular product for Apple, and now Microsoft is trying to convince you that they have a better alternative to the Air, the Lenovo Yoga 3 Pro.

Microsoft has released a new video showing the Lenovo Yoga 3 Pro notebook, is also a convertible tablet device, next to Apple’s MacBook Air, have a look at the video below.

As you can see in the video, Microsoft is trying to promote the Lenovo Yoga 3 Pro as a more versatile alternative to the MacBook Air, the company has also launched a new microsite for the device, which you can see at the link below.

In previous adverts Microsoft have focused on their Surface Pro 3 tablets, what do you guys think, does Microsoft’s new advert make you want to buy the new Lenovo Yoga 3 Pro over a MacBook Air, leave a comment and let us know.