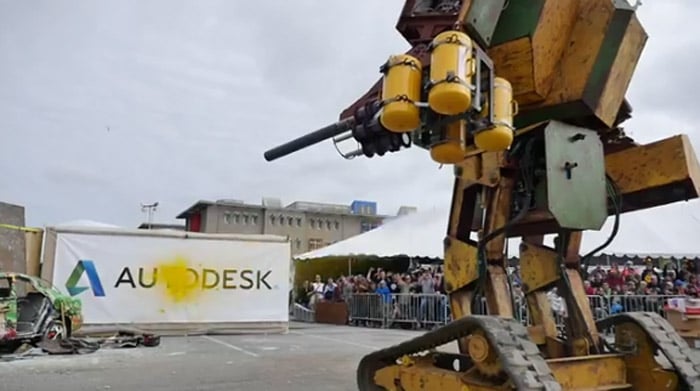 One of the coolest things that I have seen in a long time has turned up and it is called the MegaBots Mk II. This is a giant robot that cruises around on tank treads and looks like it came right off the screen in my old favorite video game MechWarrior. Rather than being fitted with real machine guns and rocket launchers, this bot has paintball cannons.

Those paintball shooters can do some serious damage to people and cars though. The balls fly out of the weapons on the robot at around 100 mph. You have to watch the video and see the paintballs destroy cars. The giant robot stands about 15-feet tall and weighs in at 12,000 pounds. It has a two-man cockpit.

Rolling around and shooting up old cars isn’t all this thing is about. The makers of the MegaBots Mk II have challenged a similar robot form Japan. The robot beat down is set to take place next year. That will be something interesting to see indeed. The Robot form Japan looks very serious. Watch the video to see some old cars get beat down with colorful bullets filled with paint.

Watch this video on YouTube.
Filed Under: Gadgets News