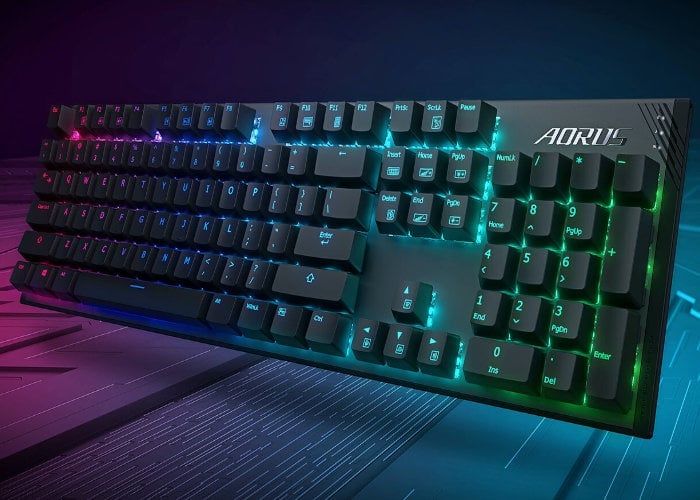 This week GIGABYTE has introduced a new addition to their range of mechanical gaming keyboards announcing the launch of the new AORUS K1 keyboard. The AORUS K1 is equipped with German CHERRY MX mechanical gaming RED key-switches, capable of quickly and accurately capturing your movements. The AORUS K1 switch has linear switching characteristics, 45 cN operating force and 2 mm actuation travel.

“AORUS K1 sculpts some details in its simple and neat appearance, so that the keyboard can still show its own personality. RGB Fusion 2.0 allows AORUS K1 to display lights with other AORUS devices and customizes various lighting modes. Other functions such as full-range anti-ghosting capability, all keys programmable with on-board memory, and on-the-fly multimedia and backlight control, are all designed to meet the requirements of gamers” explains GIGABYTE.

“High-quality German-made technology, hundreds of keys working accurately, and a service life 100 million plus times for the keys, so that gamers have no worries while competing, making the CHERRY MX gaming red key-switch the obvious choice for gamers. AORUS K1 is equipped with RGB Fusion 2.0 which has 16.7 million colors of lighting colors and multiple lighting modes. It can be synchronized with other AORUS devices. It can also set different lighting methods for each individual key to create your own unique colors.”

Unfortunately, no information on pricing or worldwide availability has been released as yet by GIGABYTE, but as soon as more information comes to light, we will keep you updated as always. Features include :