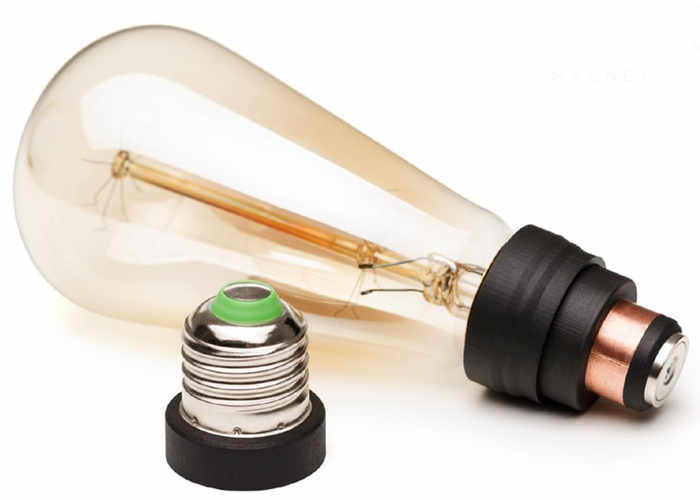 Magbulb has created a new lightbulb adapter which converts the screw thread or bayonet on E26\27 into a magnetic connection. Allowing you to easily and quickly replace broken bulbs or swap out a bulb to a different style or version depending on your needs. Magbulb takes the form of a unique plastic adapter consisting of two parts one that is screwed onto the lamp holder and the other that is attached to the lightbulb providing a magnetic connection. Watch the demonstration video below to learn more about the Magbulb.

Magbulb – the easiest way to change lightbulb. Even your cat or monkey can change the lightbulb with magbulb. Magbulb is a brilliant solution for people who don’t like to waste time on monotonous tasks. The Magbulb is very affordable solution that can save your money also. According to the Proreferral the changing of the light bulb costs average $50 And With Magbulb you can change lightbulb quickly and without extra cost.

In most cases, you have to use both hands to change a bulb: one hand to unscrew, and the other to steady the base of the holder. Pair that with balancing on top of a three-meter high ladder, and safety levels drop significantly. According to the U.S. Centers for Disease Control and Prevention, in 2016, more than 200,000 cases were reported citing incidents with people on ladders (5% death, 30% serious injuries, 65% medical care).   Magbulb requires only one hand to change a bulb, making it safer, quicker and easier to complete a once daunting task.

Magbulb is now available to back via Kickstarter with early bird pledges starting from just $42 and delivery expected to take place during February 2018. For full specifications and more information jump over to the official Kickstarter campaign page via the link below.