We have good news for all those who are living in UK. Two most anticipated devices – Samsung Galaxy Note 3 and Sony Xperia Z1 – that are expected to debut next week at IFA will make their way to Three UK. An anonymous tipster, who claims to work for Three UK, has shared an internal document showing us the release dates for the two devices on the carrier. 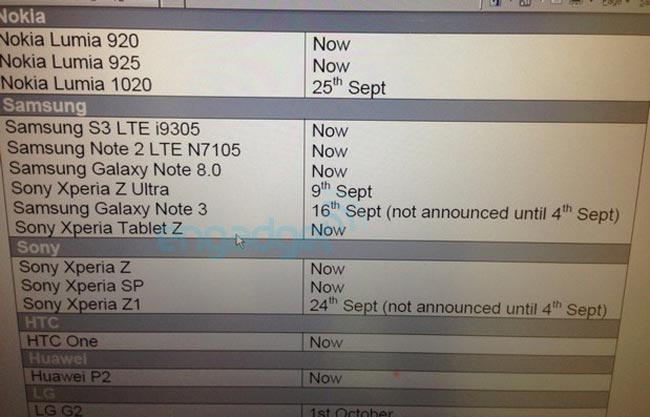 Samsung Galaxy Note 3 is expected to hit UK on 16 September, while the Sony Xperia Z1 is set to launch on September 24. We advise you not to put your entire faith in these rumors but take them with a bit of speculation. The internet document shows the date on which the device will hit Three UK, not the date when it will be available for sale; it can be before the above mentioned date for both devices.

Another interesting thing shown in the image is the Xperia Z Ultra launch date. Some rumors suggested that the device will start selling from September 12 while others pointed to September 6 release date.

Both companies have scheduled an event on September 4 and there is no surprise that we will see the devices on Wednesday. So, let’s just take this as a rumor and not confirmed news. There is no sign that the document leaked belongs to Three UK but we should think positively. Even if the document doesn’t belong to Three, we do have a hint that the devices will hit UK sooner than expected.