Samsung is rumored to be working on updates for a bunch of it’s applications with a revamped UI, including the S Health and S Voice apps.

Recently, the folks at SamMobile managed to get their hands on a number of screenshots of the upcoming S Voice app which is expected to see the light of the day with the upcoming Samsung Galaxy S5. 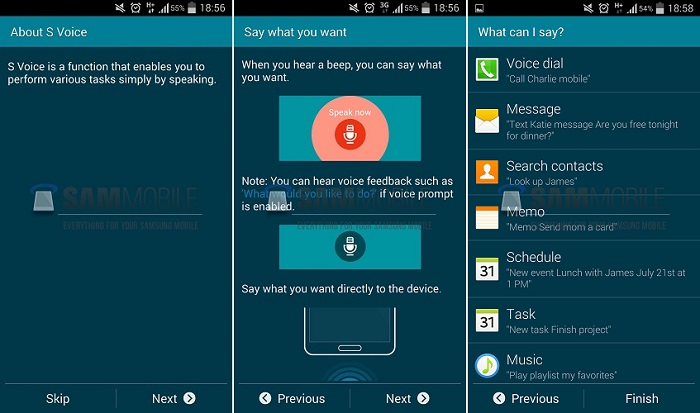 SamMobile mentions the screenshots posted above are taken from a device with a model number SM-G900H, which could possibly be the upcoming Samsung Galaxy S5. For those of you who don’t know what S Voice is, it’s a personal assistant application with support for voice commands to perform actions on the device.

The upcoming S Voice application is expected to come with many new features and bug fixes. It seems Samsung decided to give its default applications a complete makeover, which can be seen from the leaked S Voice screenshots as well. While the previous leaked screenshtos of S Health and other applications looked catchy, this one’s a little different and many of us (including me) may not get impressed with the new S Voice interface.

Rumors suggest it will debut with the Galaxy S5, which is expected to see the light of the day at Samsung’s Unpacked event on February 24th in Barcelona. We will update you as more information surfaces about the Samsung Galaxy S5 or any other thing Samsung is planning to introduce.