If you’re the type who’s prone to claustrophobia, then a sleepover in one of these holes is not a good idea. The Dasparkhotel in Austria and Germany are a new trend that’s recently hatched. While the novelty factor in them is high, a lot of blokes might not be too cozy with sleeping in structures destined for sewers. Yes, each ‘unit’ in the hotel is made of concrete drain pipes. Unused concrete drain pripes (fortunately). 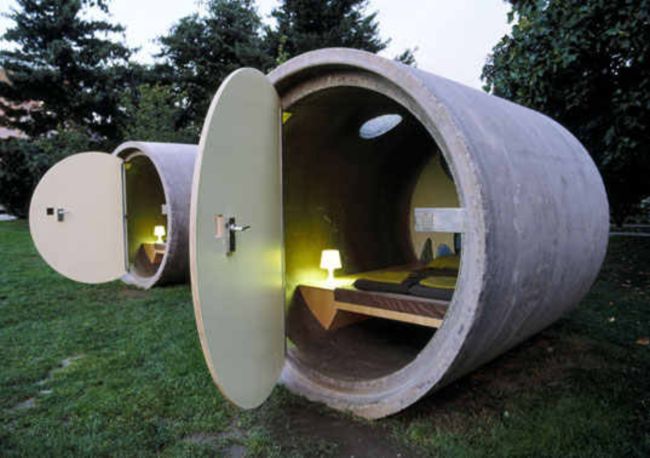 The whole drainpipe living movement, so far limited to Germany and Austria, should have some sort of appeal. Remember, we live in uncertain economic times. Cities are crowded. Prices are soaring.
The good news about the Dasparkhotel is that travellers short of funds can pay whatever they think is appropriate for the impromptu accommodation. If the Desparkhotel does become trendy, maybe expansion should involve burying a few of these in a hillside and calling the establishment ‘The Shire.’
Makes some sense, as the trend in smaller city cars, more sleek multi purpose gadgets, and easier travel allows points to a miniaturized future society where everything comes scaled down. But living in drain pipes isn’t such a bad idea. Might as well get used to them. Where else will humanity hide after the machines take over?