It’s such a bummer to get stuck with a person who doesn’t know how to shut up. If only there’s a way to shut them up without hurting their feelings (or punching their faces. Haha!) A pair of Japanese researchers just might have the answer. 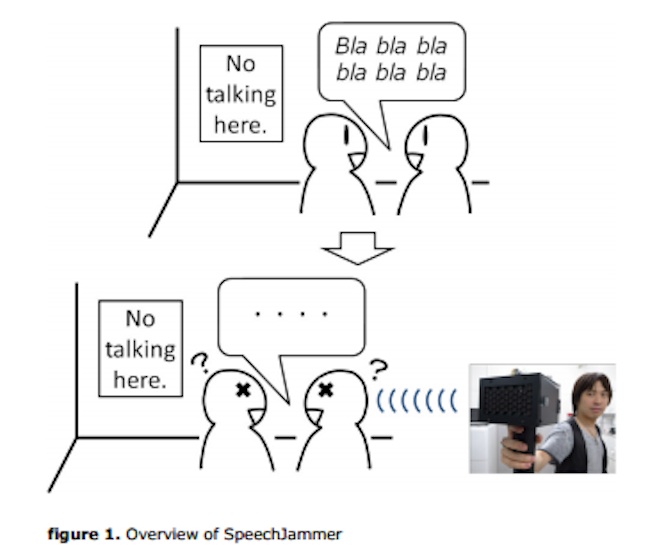 It takes the form of a gun and you point it at the person’s mouth to commence peace and quiet.  It works by recording the person’s voice through a directional microphone. It then adds a 0.2 second delay and fires the recorded speech back to the loquacious speaker. The brain needs instant feedback to continue speaker. Hearing a constant echo of their voice disrupts with this system and brings the “target” to a sudden halt.

In a paper describing their invention, Kurihara and Tsukuda emphasized that communication maybe an important medium to resolve conflicts, but too much of it may add fuel to the fire.

The SpeechJammer is confirmed to shut up even the loudest chatterboxes. It is an oversized gun that looks like it can wipe your memory out. Just pointing the monstrosity that is the SpeechJammer is enough to get a shock. Add in a sneer and evil laugh and you don’t have to turn it on!

The SpeechJammer may be the best in stopping speech, it has no power of stopping that annoyed person you just pointed a weird gun at. Try staying at most 30 feet away just in case.