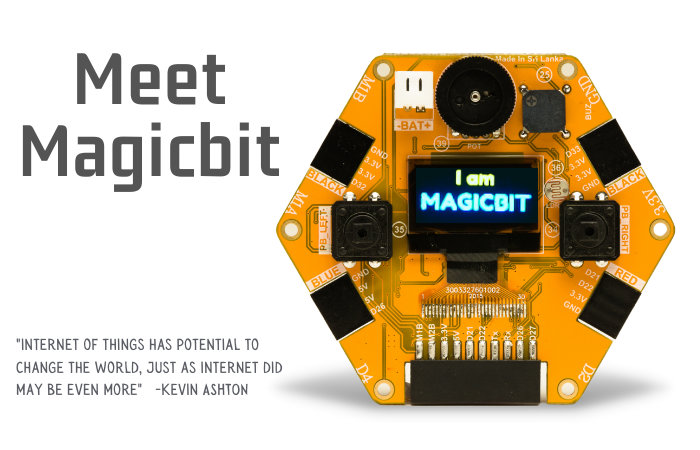 Makers, developers and hobbyists looking for a way to learn more about the Internet of Things may be interested in a new piece of hardware created by the team of engineers at Magicbit. The development board has been created to provide an easy way to create IoT projects in just 10 minutes and is equipped with a versatile ESP 32 powered and Arduino compatible design.

Magicbit features a development environment consisting of a cloud based IoT platform called Magicblocks, together with a companion phone application that can seamlessly connect to your projects for interaction and feedback. The develop platform also includes pluggable modules removing the need for jumper wires, bread boards and soldering. The visual code builder with block programming allows beginners and experienced developers to quickly create and prototype projects and applications.

Specially priced early bird pledges are now available for the interesting project from roughly $23 or £17 (depending on current exchange rates). If the Magicbit campaign successfully raises its required pledge goal and the project progresses smoothly, worldwide shipping is expected to take place sometime around October 2021. To learn more about the Magicbit Internet of Things platform project watch the promotional video below.

“Internet of Things(IoT) has become part of our life. From small devices such as a smart phone to a large device such as an airplane, everything is connected to the internet today. It is estimated that there will be more than to 21 billion IoT devices by 2025. How cool is it to develop an IoT project in less than 10 minutes? You might wonder whether it’s really possible. Yes, have have developed a tiny computer called Magicbit which can be programmed to create different innovative applications easily by anyone.”

“Magicbit has a development environment with cloud based Internet of Things platform called Magicblocks and a mobile app which can be seamlessly connected for to create innovative solutions. Magicbit is packed with a wide of feature range. It has an ESP32 module in it’s core together with sensors, actuators and connectivity modules built in. The idea is to minimize the additional components required when developing solutions. This makes the life easy, even for a beginner. “

“Magicblocks.io is a cloud based IoT platform we developed with inbuilt device manager and visual code builder based on Node-RED. This hides the complexity of hardware, firmware and protocols. We want to encourage innovators to focus on logic and creativity.”

For a complete list of all available early bird specials, stretch goals, extra media and engineering specifications for the Internet of Things platform, jump over to the official Magicbit crowd funding campaign page by following the link below.