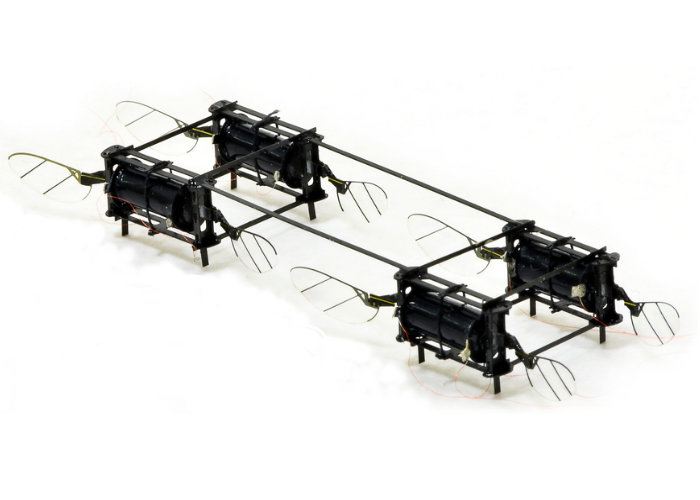 Researchers at MIT have create next-generation insect inspired drones. Chen, a member of the Department of Electrical Engineering and Computer Science and the Research Laboratory of Electronics, has developed insect-sized drones with unprecedented dexterity and resilience, check out the video below to see them in action and learn more. The drone’s actuators can flap nearly 500 times per second, giving the drone insect-like movement and features and weighs just 0.6 grams.

“If you’ve ever swatted a mosquito away from your face, only to have it return again (and again and again), you know that insects can be remarkably acrobatic and resilient in flight. Those traits help them navigate the aerial world, with all of its wind gusts, obstacles, and general uncertainty. Such traits are also hard to build into flying robots, but MIT Assistant Professor Kevin Yufeng Chen has built a system that approaches insects’ agility.

Typically, drones require wide open spaces because they’re neither nimble enough to navigate confined spaces nor robust enough to withstand collisions in a crowd. “If we look at most drones today, they’re usually quite big,” says Chen. “Most of their applications involve flying outdoors. The question is: Can you create insect-scale robots that can move around in very complex, cluttered spaces?””

“Building insect-like robots can provide a window into the biology and physics of insect flight, a longstanding avenue of inquiry for researchers. Chen’s work addresses these questions through a kind of reverse engineering. “If you want to learn how insects fly, it is very instructive to build a scale robot model,” he says. “You can perturb a few things and see how it affects the kinematics or how the fluid forces change. That will help you understand how those things fly.” But Chen aims to do more than add to entomology textbooks. His drones can also be useful in industry and agriculture.”