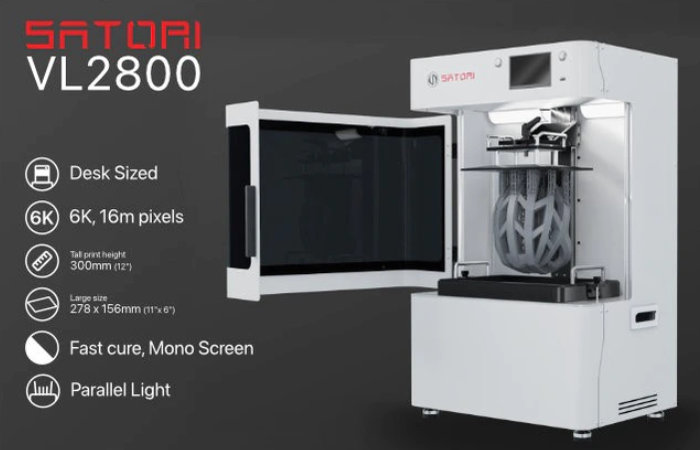 The Satori VL2800 is a new industrial 3D printer created by a team of engineers based in London in the United Kingdom. The large-scale resin 3D printer has been designed from the ground up for high performance and reliability with a focus on precision, scale and speed.

Specially priced early bird pledges are now available for the innovative project from roughly $2902 or £2150 (depending on current exchange rates), offering a considerable discount of approximately 30%% off the recommended retail price, while the Kickstarter crowd funding is under way. If the Satori VL2800 campaign successfully raises its required pledge goal and production progresses smoothly, worldwide shipping is expected to take place sometime around September 2021. To learn more about the Satori VL2800 industrial 3D printer project review the promotional video below.

“Satori was founded on the realisation of a new need in resin printing, between hobby and existing industrial machines. On the one hand, hobby printers are a great introduction into 3D printing, but they have to compromise on materials to hit marketing points so are not reliable enough for large prints or long operational hours. On the other hand, industrial machines, based on old patents, are expensive; typically above Â£10,000.”

“Satori builds on learnings from the 3D printer community, and produces a no-compromise printer, which combines high-quality parts with efficient cost control. Here we are: help creatives like you escape constant printer maintenance and get real work done!”

“Satori VL2800 Kickstarter campaign is supported by Elegoo’s reliable manufacturing capacity, which has successfully manufactured and shipped over 100,000 units of 3D printers worldwide in 2020. To ensure a streamlined approach, Satori has engineers on-site to supervise quality control. “

For a complete list of all available special pledges, stretch goals, extra media and detailed specs for the industrial 3D printer, jump over to the official Satori VL2800 crowd funding campaign page by clicking the link below.