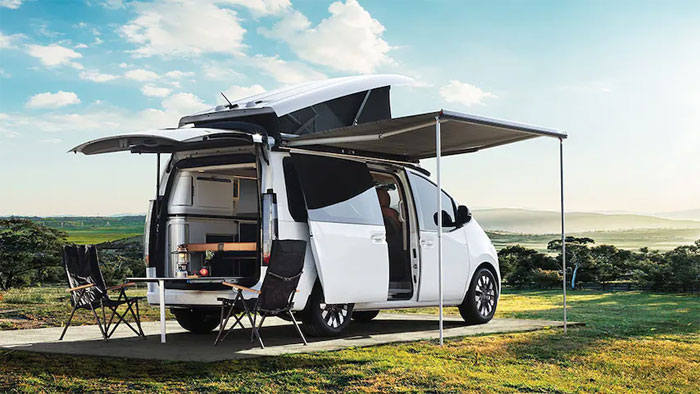 Hyundai has revealed a new van for overseas markets called the Staria, which will replace an older van it previously sold called the Starex. The Staria looks about as cool as a minivan possibly could, and there will be a model meant for camping. This particular version is known as Camper 4, and there are a few other versions.

Hyundai has fitted Camper 4 with a pop-upper roof system with the dedicated controller in the van. The entire roof raises, and when it’s down, it blends almost seamlessly with the van’s body, making it look like a standard vehicle. Hyundai also fitted Camper 4 with a retractable awning on the exterior and a mesh screen that covers the rear hatch to let fresh air in while keeping biting critters out.

Both power and freshwater supply are available on the outside to supply the sink and lighting on the interior. The van does have an outdoor shower. The interior seats fold flat to make what appears to be an uncomfortable bed. As the name, Camper 4, implies, four people can sleep in the van. It has a small indoor kitchen with a sink and refrigerator and an interior table. The Staria won’t be offered in the US.