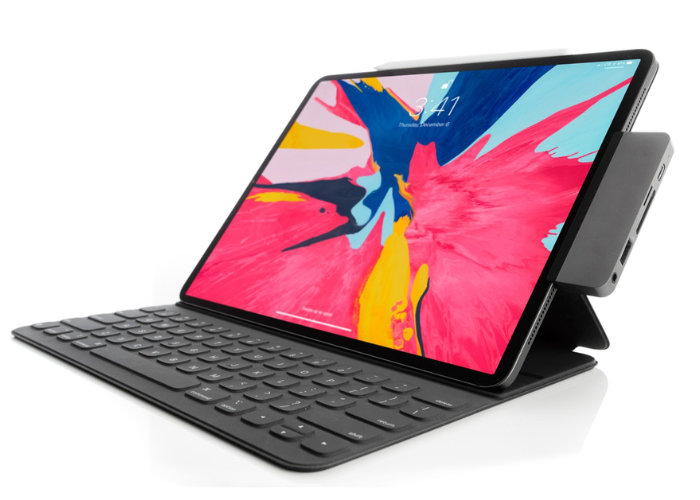 After being unveiled back in November the HyperDrive 2018 iPad Pro USB-C hub is now available to back via Kickstarter and has already raised over $90,000 thanks to over 1,500 backers with still 35 days remaining on its campaign.

To recap the HyperDrive connects to the iPad Pro’s new USB-C port and allows you to simultaneously connect HDMI, USB-C, microSD, SD, USB-A and 3.5mm audio, all while charging at full speed through the HyperDrive hub.

Patented soft grips that secures HyperDrive onto the iPad Pro without interfering with the Apple Smart (Keyboard) Folio and the grips are removable to work with other iPad Pro cases or devices depending on your needs. Its creators explain a little more about the inspiration behind the HyperDrive and how it compares to other devices on the market.

“Compared to other dongles in the market and from the Apple Store, HyperDrive is more portable, has more features and is made of better materials. You would need multiple dongles to achieve what HyperDrive does, at a total cost much higher than HyperDrive.”

For more information and to make a pledge from $49 jump over to the official Kickstarter crowdfunding campaign page by following the link below. If all goes well worldwide shipping is expected to take place during January 2019.