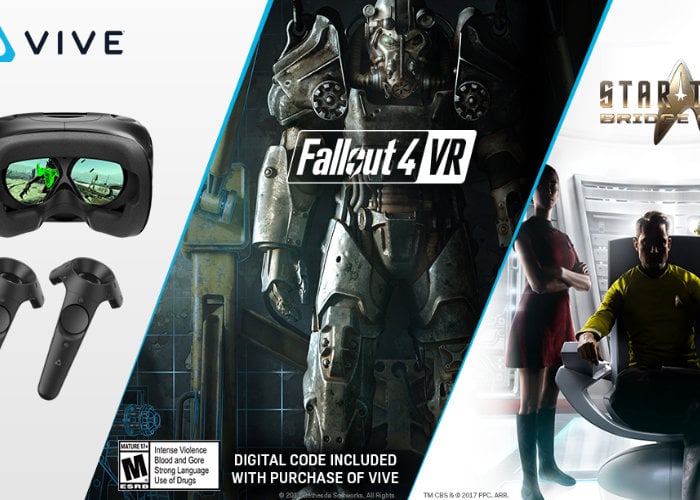 HTC have unveiled a new Halloween virtual reality offer for their HTC Vive headset, available exclusively in the U.S. and Canada for the Halloween celebrations and offering Star Trek: Bridge Crew, Fallout 4 VR, Tilt Brush by Google and a trial to VIVEPORT Subscription, all for free when you purchase HTC Vive virtual reality headset. If you fancy getting your hands on the AAA titles of VR from Ubisoft, Bethesda and Google don’t delay as the offer is limited to the duration of the Steam Halloween Sale.

Jump over to the official Steam HTC Vive promotion page by following the link below for more details and to purchase. If you are thinking of purchasing the virtual reality headset, now is a good time as any as the price was reduced by HTC a few months ago to compete with a lower price of the Oculus Rift.

VIVE is a first-of-its-kind virtual reality platform developed by HTC and Valve for total immersion in virtual worlds. Using a headset and wireless controllers in each hand, you can now explore and interact with VR experiences, apps and games that blur the line between imagination and reality.

Breathtaking visual experiences are provided by a headset that features a 110° field of view and 32 sensors for precise tracking for total immersion. The 2160 x 1200 resolution and 90 Hz refresh rate deliver detailed graphics and lifelike motion for smooth gameplay and realistic movement. Fluid interaction is provided by two wireless controllers, each with HD haptic feedback, dual-stage triggers, and multi-function trackpads. Each controller features 24 sensors for 360° one-to-one tracking that mirrors hand movements. Room-scale motion tracking is enabled by two base stations that sync wirelessly avoiding the need for additional cords.

Vive’s built-in convenience and safety features are seamlessly integrated for an uninterrupted experience. The Chaperone guidance system alerts you if you approach the boundaries of the play space, while a front-facing camera blends physical elements into the virtual world. These features, working in concert, allow Vive to transport users to worlds that are truly beyond the imagination. Discover Vive today, and see for yourself: THIS IS REAL.