We are sure you have tried flying a paper airplane before, but these guys from Pima Air & Space Museum were able to fly one 2,703 feet from the ground. 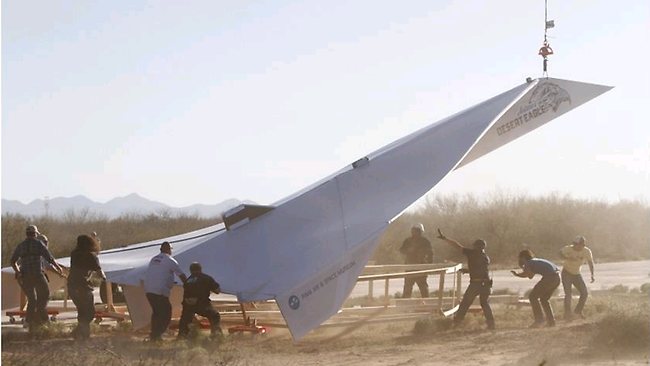 The paper aircraft, however, is not an ordinary one. Measuring 45 feet long with a wingspan of 24 feet, the giant paper airplane called Arturo’s Desert Eagle was really crafted to hover Arizona Desert. It was made of thick layers of falcon board, similar to the corrugated board comprising pizza boxes. The plane was designed by Arturo Valdenegro, a 12-year-old and the plane’s namesake, and Art Thompson, a co-designer of the B-2 Stealth Bomber.

A Sikorsky S58T helicopter propelled it to the sky, or rather, let it loose to fly. Seven to 10 seconds was all it took for Arturo’s Desert Eagle to fly up to 100mph, but its fate was not as glorious: its tail succumbed to air pressure, leading to its crash.