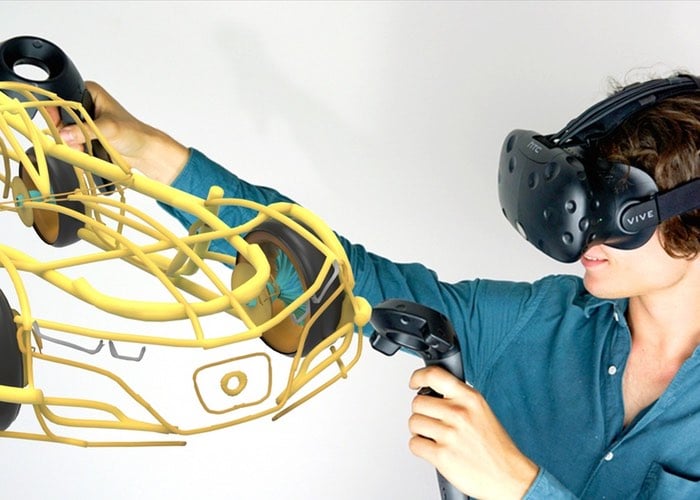 A development and design team based in London, have created a new intuitive 3D design application which has been designed to be used with either virtual reality headsets and controllers or in a more traditional environment directly on your desktop.

Daniela, Daniel, and Oluwaseyi the designers behind Gravity Sketch explain a little more about its inspiration, design and features, as well as explaining those of you that might find it useful. Watch the video below to see the first 3D creation tool which has been designed for both gesture and touch input via either VR or keyboard and mouse in action.

For years 3D design tools have been difficult to learn and a nightmare to use. We have designed a user experience that makes sense for everyone. We have lowered the barriers to 3D literacy, striving to make digital 3D creation easier for designers, artists, and makers alike.

Our first product, Gravity Sketch iOS is already being used by thousands of creators all over the world. Thanks to their feedback, we have developed a more advanced tool. We are launching a desktop and virtual reality version to make 3D sketching even more powerful. Who is it for?

– For everyone that has an idea in their head and wants to bring it to the world!!
– 2D designers that have always wanted to go into 3D but found it difficult or BORRING!!!
– Professional CAD users that would love freedom and speed in the initial stages of creation.
– For those who are always in the look for a new tool!
– For STEM teachers and students to explore, make and learn.
– For 3D print enthusiast that have always wanted to create their own 3D content.
– For animators looking for a cool tool that will bring personality to their creations.
– For game developers looking for quick and easy tools for creating environments and characters.

You can use a touch screen computer or a Wacom tablet to sketch with Gravity Sketch Desktop. With each stroke you create 3D geometry in a mater of seconds. You can integrate Gravity Sketch into your regular workflow: export to adobe suite, CAD packages, C4D and more! Gravity Sketch reacts to pen pressure and motion so you can get speed lines and control the line thickness with each stroke. Gravity Sketch gives a fully immersive creation experience, in the virtual world express your imagination from handheld to architectural scale. You can export and share your models as .obj and soon as .stl files.

For more information on the new Gravity Sketch application jump over to the Kickstarter website for details, full specifications and the ability to make a pledge from just £25 for a single licence by following the link below.