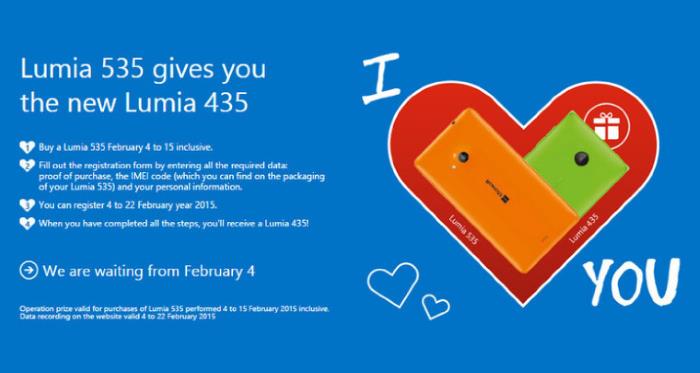 It’s been a few days since Microsoft unveiled what it calls the cheapest Windows Phone handset, the Lumia 435, alongside the Lumia 532, which brings a similar display size, but with a little better specifications.

To spice things up, Microsoft is offering a promotion where users in Italy would get a free Lumia 435 with the purchase of the Lumia 535.

The special promotion will kick off on February 4th, and will last until February 15th, so if you purchase the Lumia 535 in between those dates, you’ll be eligible to get a free Lumia 435. All you have to do is to register on Microsoft’s Amore Esagerato before February 22nd, and you’ll get a brand new Lumia 435.

Lumia 535 offers a decent set of specifications, including a 5-inch display, Snapdragon 200 processor, 1GB of RAM, 5MP rear and main camera, and ships with Windows Phone 8.1 with Lumia Denim.

As for the Lumia 435, it’s an entry-level handset from the Redmond-based company, flaunting a 4-inch display, a dual-core Snapdragon 200 SoC, 1GB of RAM, 8GB of internal storage, 2MP camera for photos and videos, a 1,560 mAh battery and runs Windows Phone 8.1 as its operating system.