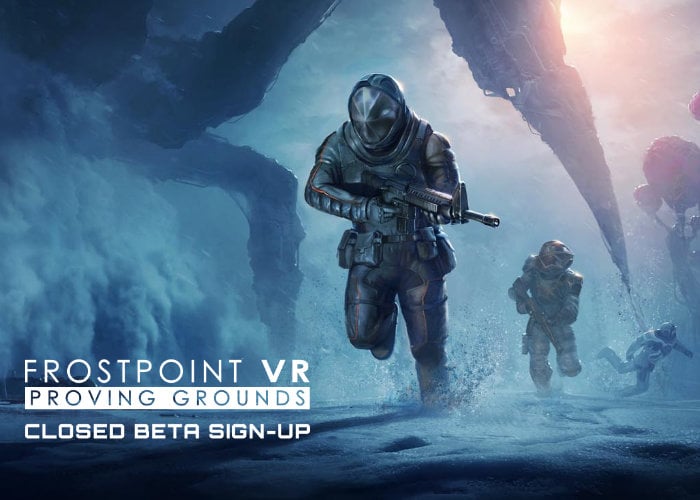 Beta registration is now open for the upcoming virtual reality team-based multiplayer shooter Frostpoint VR. Frostpoint VR: Proving Grounds allow 20 players to battle it out in virtual reality in 10v10 teams and coordinate their tactics through “approach, strategy, and gear to dominate the enemy team through beautiful maps and engaging game modes like capture and control” says the games developers.

** If you were an Alpha tester you do not need to sign up again!

“Teams will fight for control of a forgotten military base in Antarctica where other players aren’t the only enemy. Gear up and charge forward to deal with the opposing team and protect yourself from the constant, otherworldly biomechanical threat. Over a dozen rifles and pistols have been recreated in painstaking detail, allowing you to realistically hold each with one or two hands, and load, rack, fire, and clear them, as well as change firing modes. Tools and munitions help round out your arsenal, including grenades, health kits, armor upgrades, turrets, and tracking upgrades.”

“Welcome to the closed beta test sign up page for Frostpoint VR: Proving Grounds. Invites will be sent as needed to ensure we hit our testing goals. Keep an eye on your email throughout the beta period. Signing up is not guaranteed entry into the beta. Please note that this closed beta test is available only through the steam client. If you are selected, you will receive instructions on how to redeem the key if you are selected.