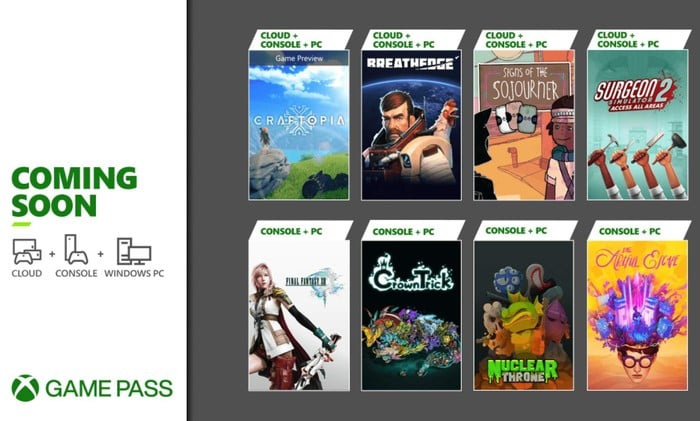 Microsoft has today announced the next round of free Xbox games that will be available on the Xbox Game Pass during September with a few already available such as Final Fantasy XIII, Signs of the Sojourner and Surgeon Simulator 2. The role-playing game Final Fantasy XIII is available to play on console and PC and allows you to engage in “heroine Lightning’s fast paced battles and high adventure in a mysterious new world.”

Signs of the Sojourner is now available to play via the Xbox Cloud, Console, and PC offering a card game about connecting with people. “Your deck is your character, reflecting your experiences, and shaping your relationships. Travel to diverse locations to acquire goods for your shop.” Finally Surgeon Simulator 2 is also available to play today on Xbox Cloud Console and PC systems and offers a chance to “Access All Areas“.

“Bob’s life is in your hand! Scrub-in solo or with up to three friends in this physics-based sim and unearth the mysteries of the Bossa Labs Medical Facility, explore hundreds of community-made levels, and even create your own using the sandbox level building tool. Or, if you prefer, spend your time replacing all of Bob’s limbs with heads – that also works.”

Crown Trick (Console and PC) ID@Xbox available to play from September 7th
Welcome to The Nightmare Realm! Guide protagonist Elle on a perilous journey through procedurally generated dungeons, carefully navigating unique enemies and traps that only move when Elle does thanks to Crown Trick’s unique synchronous turn-based mechanic. Strategically plan each move to survive, master a combination of skills, Familiars, and weapons to escape the labyrinth.

Breathedge (Cloud, Console, and PC) ID@Xbox available to play from September 9th
Inspired by Retrofuturism, Soviet aesthetics, and dark comedy movies, Breathedge is a fresh take on the survival genre that puts you in control of a simple guy called the Man who is carrying his grandpa’s ashes to a galactic funeral and suddenly finds himself in the middle of a universal conspiracy.

Nuclear Throne (Console and PC) ID@Xbox available to play from September 9th
Nuclear Throne is a post-apocalyptic roguelike-like top-down shooter. Fight your way through the wastelands with powerful weaponry, collecting radiation to mutate some new limbs and abilities. All these things and more you could do if only you were good at this game. Can you reach the Nuclear Throne?

For more information on free Xbox games already available on the Xbox Game Pass service, as well as Xbox Game Pass Ultimate Perks you can in while playing Xbox games jump over to the official Xbox new site by following the link below.