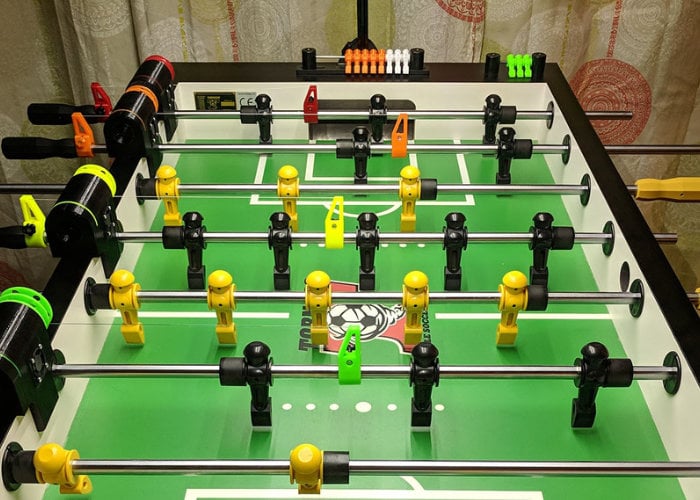 WeFoos has taken to Kickstarter this week to launch required funds to take FoosFit their foosball robotic training tool into manufacture. Early bird pledges are now open from $350 or roughly £265 to the first 100 backers and deliveries expected to take place sometime around June 2019. Check out the video below to learn more about the team at Aptus Engineering responsible for creating and developing the FoosFit robot training tool.

FoosFit takes the form of a mechanical defensive device for foosball practice that is programmable to suit your style of play. Enabling you to practice the exact plays and movements required to crush your opponents during competitive play or simply when battling against friends.

“The previous analog controls have been removed and replaced with a custom PCB board with Bluetooth connectivity. Using 3D print production, we’re able to modify the box design to fit any table. Each device now self calibrates when powered on, eliminating the motor seizing issue. And conveniently, each FoosFit device attaches independently to each rod of your foosball table in under one minute, as seen below! We now have three digital controls (speed, position, and range) within the FoosFocus progressive web app (PWA).”

“The future for the FoosFit & FoosFocus involves a curriculum that will teach beginners the game of foosball, incorporate computer vision to allow for record and playback of any defense, and a platform that enables players to compete online. It’s time for foosball to be reintroduced to today’s tech driven world. We believe a product that allows foosball to be connected for both online competition and training is a must have for the survival of the game in today’s digital era. And as you can see, we’re not alone. “

For more details, demonstrations and specifications on the FoosFit foosball robot training system jump over to the official Kickstarter campaign page by following the link below.