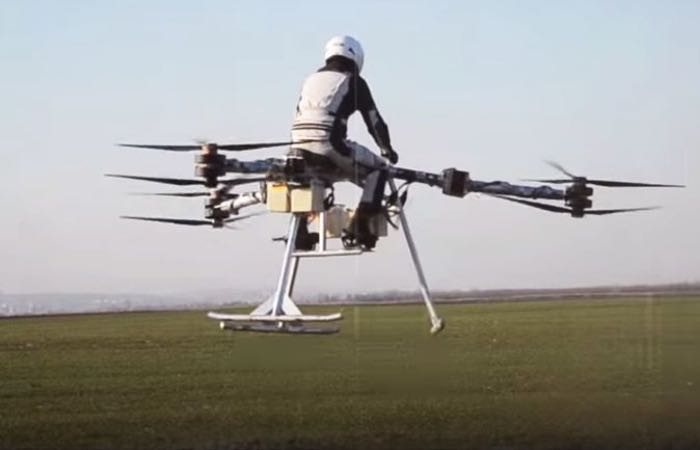 The first piloted flight has taken place on the Flike personal tricopter that has been developed and constructed by a Hungarian team of flight enthusiasts.

In just under a year the team has been able to create the personal flight tricopter from concept to its first manned flight at Miskolc Airfield in northeast Hungary. Watch the video below to see it in action.
The Flike tricopter is fitted with Lithium Polymer batteries, providing around 15-20 minutes of hover flight, that extends to 30-40 minutes in cruise mode. The lift for the craft is provided by six fixed-pitch, carbon composite rotors, directly driven by individual electric disc motors. Its creators explain:

“Flike is a revolutionary, all-electric personal flight device under development in Hungary. For the techies: it is a coaxial, Y6-layout tricopter, which means that the lift is generated by six rotors, grouped in counter-rotating pairs of three axes, equally located around a circle.

Due to its layout, Flike is fully controllable by solely adjusting the rotation speed of individual rotors. Its airborne behaviour is comparable to any helicopter: it can hover, roll, bank, drift, spin, yaw, climb, turn, sidle, dive… just as well as it is also capable of various things yet to be named.”

It might not be the longest flight in history in the video below but everything has to start with small steps, and the potential of the Flike personal tricopter is evident to be seen. For more information on the new Flike jump over to the official website for details via the link below.