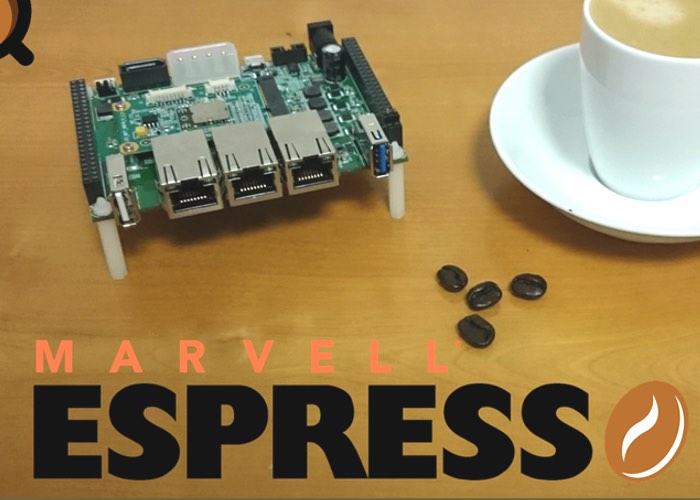 Globalscale Technologies has launched a new Kickstarter crowdfunding campaign this week to raise the required $15,000 they need to take their new Marvell ESPRESSOBin Board into production.

The ESPRESSOBin has been created to provide a high performance 64-bit dual core networking platform which has a low power consumption and is based on the RMv8 architecture. Watch the video below to learn more about its design and features.

ESPRESSOBin Board is a low cost high performance ARM based 64bit single board computer aimed at the networking, storage, and connectivity space. It utilizes Marvell’s newest Armada 3700 chipset which is a dual core SOC running up to 1.2Ghz based upon the ARM A53 64bit instruction set.

ESPRESSObin is much more than just another SBC like the Raspberry Pi and the Pine64. It has a powerful set of Networking & Storage interfaces such as a dedicated networking Switch and Gigabit WAN & LAN. It can connect to storage such as USB 3.0 thumb drives and HDD hard drives via USB and SATA. For networking applications it acts like an ethernet switch with 2 LAN and 1 WAN.

ESPRESSObin has a very low power consumption with less than 1W Thermal dissapation at 1 Ghz. ESPRESSObin address a host of applications that has been overlooked by other SBC such as home and office networking, storage,& media streaming, and IoT. Here are a few examples that we demonstrate on the lab using open software applications.