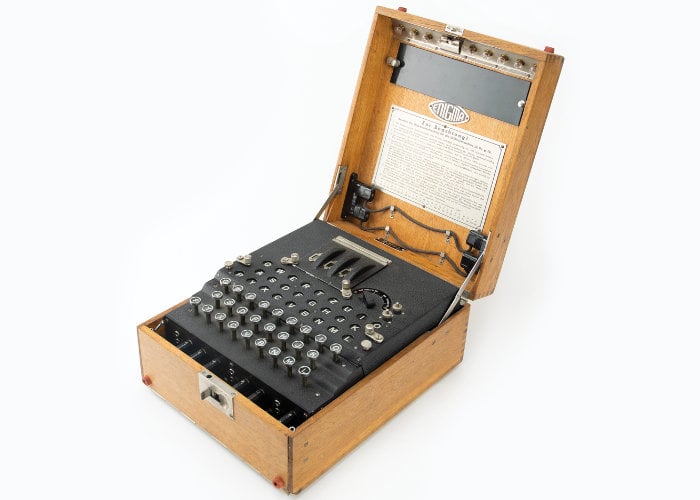 If you have ever dreamt of owning a World War II Enigma Machine, a three-rotor cipher machine will be auctioned by Boston-based RR Auction. The machine was originally made for the German military in Berlin in 1935, during the buildup of German forces in violation of the Treaty of Versailles prior to World War II.

Alan Turing and the other brilliant code breakers at Bletchley Park continued their important work, speeding up the time it took to decode Enigma messages. The code breaking efforts at Bletchley Park led to the development of the world’s first computers as technology was pushed to defeat German cipher machines.

“First patented in 1918 by Arthur Scherbius, the Enigma machine was developed for use in the transmission of confidential information: in addition to its obvious military and diplomatic applications, the machine found commercial use for the encryption of sensitive financial data. The German military adopted the Enigma as its primary cipher in 1926, after learning that the British had intercepted and interpreted coded German naval messages during World War I. Amidst the subsequent buildup of German forces, Poland felt particularly vulnerable—having been ceded disputed border territories by the Treaty of Versailles—and sought to crack the Enigma. Genius Polish codebreakers—led by Marian Rejewski, Jerzy Rozycki, and Henryk Zygalski—developed techniques for the decryption of Enigma code, and turned over their research to Allied counterparts after Germany’s 1939 invasion of Poland. “

“Based on the chassis of the commercial Enigma D, the Enigma I machine was the standard Enigma machine used by the German military throughout the war. It features an ebonite Steckerbrett [plugboard] on the front, which was exclusive to the German armed forces and exponentially increased the complexity of the code. This version of the Enigma is sometimes referred to as the Heeres [Army] Enigma, Wehrmacht Enigma, or Luftwaffe Enigma due to its military-specific application. This machine would have been used to conceal the pre-war expansion of the German military, in addition to being used in the field during WWII and likely thereafter during the Cold War era.”